Alliance researchers in Nairobi, Kenya, report on a joint study establishing the effects of COVID-19 on residents’ livelihoods and food access

With COVID-19 disrupting food systems worldwide, the negative implications for food and nutrition security are rising daily. Vulnerable poor in urban areas are likely to feel more severe impacts, especially the over half of Africa’s urban population living in slums. However little work has yet do be conducted on the pandemic’s influence on consumption behavior, diets and food security.

This context was the genesis of a joint study between the Alliance of Bioversity International and CIAT and Twiga Foods to analyze the effects of the COVID-19 pandemic on the consumption of nutritious foods, food security and diets of residents of the Kibera and Mathare slums as well as middle-income residents in Nairobi, Kenya.

Listening to those most affected

Primarily carried out via telephone interviews (transcripts and audio clips detailed in our previous blog) to comply with COVID-19 safety measures, the surveys painted a grim picture of residents lacking access to water and income while facing high rates of disease. Careful listening on the part of the researchers helped establish details and granularity that revealed food system flows and food consumption patterns before and during the crisis, with the aim to develop better approaches for a post-COVID recovery.

The Food Environment and Consumer Behavior team from the Alliance have previously worked with Twiga Foods, a company that connects over 20,836 farmers and more than 30,000 small-scale vendors using mobile technology to capture demand for 17 fruits and vegetables. Twiga works with farmers to plan, manage, and consolidate production for distribution to small stores in low-income communities across Nairobi. Twiga sells produce at a 15% discount (compared to traditional channels) to retailers, who pass the savings to consumers. They provide low-risk market access for producers with set volumes, fixed prices, and favorable access to capital for farm infrastructure to increase productivity.

Most of our retailers are women and youth who primarily reside within the slum and non-slum areas in urban Nairobi retailing food to consumers. Their businesses have been hugely affected by the current pandemic but the magnitude of effect is yet to be established. Consumers are not buying fresh fruits and vegetables like before,” reports Joram Kabach, the Business Intelligence Team Lead from Twiga Foods.

The team from the Food Environment and Consumer Behavior at the Alliance, together with their counterparts from Twiga, formulated a questionnaire to gather primary data from 2,465 slum and non-slum households in Nairobi between the months of April and May 2020. Food and consumption behavior questions were posed to capture the situation before and during the pandemic, using a recall approach. In addition, household dietary diversity scores were calculated and both descriptive and econometric analysis conducted.

“Our study findings revealed that households in the slums are affected more than the non-slum middle income households. About 90% of households in the slums reported dire food insecurity situations. Not only are they not able to eat the kind of foods they preferred, such as indigenous vegetables and animal sourced foods like milk and eggs, which had been easily accessible before the pandemic, they now consumed a limited variety of foods and smaller portions than they felt they needed. In addition, they now have to contend with a reduced number of meals in a day. Overall, slum households have a lower dietary diversity compared to the non-slum households,” explained Christine Chege, lead researcher on the project.

The majority of the residents in the slum areas are informal laborers whose incomes depend on a daily wage and fall in the lower-income bracket. With businesses taking drastic measures to manage their operational costs, poor households are most adversely affected economically.

More than 40% of slum households do not have jobs and at present, their average monthly household income is very low, at USD78,” Joram added.

The research seeks to highlight several factors associated with quality food consumption during the pandemic period, while calling on mitigation measures to pay close attention to slum dwellers deeply affected by the pandemic. In addition, the team hopes that this research will influence policy design and implementation to include vulnerable poor consumers in the slums.

The team wrote a paper on their study findings that is under review for publication in July. It is clear from the study that the pandemic has largely affected the resource-poor consumers in the urban slums more than the middle-income consumers in the non-slum locations, with implications for food security and nutrition as well as economic aspects.

In addition, the findings have also come out to buttress the importance of listening to the voices of the poor in formulation of policies for the poor.

“This research study is among the few conducted in Africa to document the early impacts of COVID-19 pandemic on poor consumers in the urban slums. The study has used big data to highlight the impact of the pandemic and potential areas of intervention, thanks to our donor, the CGIAR Big Data Platform in Agriculture. Such cutting edge research is important for decision making by policy-makers and key for this case is improving food security and nutrition for the urban poor,” says Mark Lundy, Director of the Food Environment and Consumer Behavior Research Area at the Alliance, and a co-author of the research. 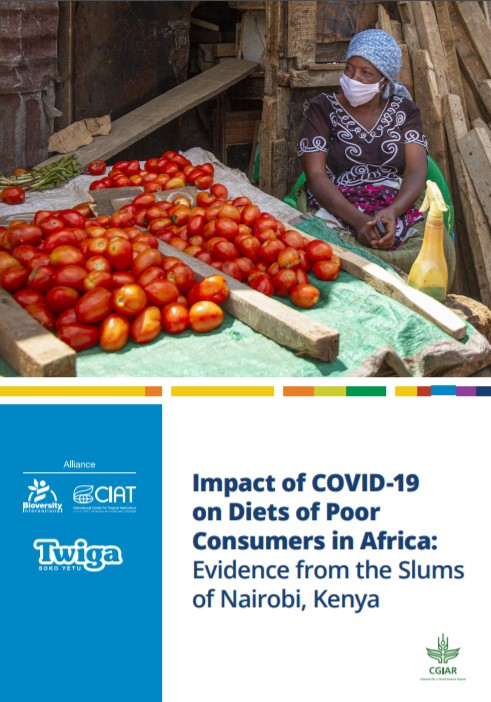 The Alliance of Bioversity and CIAT remains committed to partnerships, with the team looking to not only launch the report but also to engage key policymakers in the Ministries of Agriculture, Health and Nutrition to guide policy formulation to help alleviate the economic and nutrition challenges posed by COVID-19.

As a member of the CGIAR family, the team is hopeful that the research findings will result in the development of evidence-based proposals that partners, funders, investors and policymakers can employ to address the impacts of COVID-19 on food systems.

“Rigorous research on COVID-19’s impact on food systems will be essential to helping us withstand this global crisis, accelerating recovery once the crisis ends, and building food systems of the future that perform better in addressing the nexus of agriculture, nutrition and the environment”, Juan Lucas Restrepo, the Director General of the Alliance, noted earlier in the year. This statement remains core to this research.

Giving voice to the voiceless: How COVID-19 is impacting Nairobi slum residents, in their own words