Please note that as we move our germplasm collections to the new Future Seeds genebank, germplasm distribution remains suspended for the time being. We will provide an update as soon as distribution is restored. We apologize for any inconvenience this may cause.

By conserving precious plant genetic resources, genebanks play a crucial role in crop improvement and biodiversity conservation, supporting resilient and nutritious food systems.
Genebanks are technical facilities, where plants (either as seeds, or as plantlets in test tubes) are catalogued, conserved for the long term, and made available to scientists for breeding more nutritious, productive, and resilient varieties.
The Alliance is home to two genebanks: one in Leuven, Belgium, and one in Palmira, Colombia. They safeguard unique global plant genetic resources and hold the world’s largest collections of banana, beans, cassava, and tropical forages.
Through these state-of-the-art facilities, our team is using science to preserve the world’s biodiversity and ensure food safety for all.

Our Facilities and How they Enrich Our Future

The future of crop diversity and genebanks

Over the last century, approximately 75% of crop diversity has been lost. The world’s population now relies primarily on a few dozen crops, with humans getting ~95% of their energy from five of these alone. Crop failures due to climate change, socio-political conflicts, natural disasters, or pests and diseases, already spell disaster for millions of farmers and consumers around the world each year. This is where genebanks such as Future Seeds play a crucial role. They can provide the necessary planting materials to reconstruct agricultural losses by furnishing countries with varieties that are adapted to local conditions. They can also serve as genetic libraries from which breeders can develop new varieties of nutritious crops that are tailored to specific growing conditions across the world, building on gains achieved in agricultural productivity over the last half-century while avoiding environmental and social costs.

Home to the world's largest collection of banana germplasm, its mission is to contribute to the secure long-term conservation of the entire banana genepool and hold the collection in trust for the benefit of future generations under the auspices of the Food and Agriculture Organization of the UN.

Future Seeds will replace the Alliance’s original genebank in Palmira, Colombia, which has exceeded its capacity, and continue to house its existing collections of vital crops. These have been gathered over the past four decades across the world, and are a veritable treasure trove of bean, cassava and tropical forage species, varieties and landraces. Beans are the most important food legume for direct consumption in the world, and a primary source of protein for almost half a billion people every day. Cassava is the third most important food crop in the tropics (after rice and maize) and is also consumed by half a billion people every day. It is also a key source of income for smallholder farmers and sustains key manufacturing industries related to food, starch, biofuels and pharmaceuticals. Tropical forages are essential for developing sustainable livestock production systems globally, primarily those that can draw down atmospheric carbon dioxide and reduce methane emissions, thus contributing to the mitigation of climate change.

A global facility for the future

Future Seeds will preserve the Alliance’s growing collections of crops, while distributing samples to farmers and researchers worldwide free of charge. By adding 30% more storage space, Future Seeds will secure more wild varieties and landraces, which may hold the secrets to higher temperatures, drought and floods. A new module, the Data Discovery and Biotechnology Lab, will facilitate discoveries, relying on genomics and big-data technologies, to continue improving crops for higher yields, better nutrition and climate resilience. Scientists around the world will have free and open access to the digital passports for these crops, expediting collaboration and discoveries. Through Future Seeds, the Alliance will also collaborate with partner genebanks around the world on optimizing protocols for cryopreservation and ensuring plant health, and by hosting collections, including safety duplicates, of other key crops. Additionally, a new generation of genetic resource scientists will be trained at Future Seeds.

Future Seeds will be the first ever platinum-level LEED (Leadership in Energy and Environmental Design) certified genebank building in the world. It has an iconic and energy-efficient building design including an external “skin” canopy to repel solar radiation, panels to harness solar energy, thermal control, natural ventilation and rainwater harvesting. The building itself will convey a strong public message about the vital importance of environmental sustainability. An external review of the Alliance’s protocols for managing crop collections found the genebank to be operating at the highest technical and scientific standards relative to other genebanks around the world. 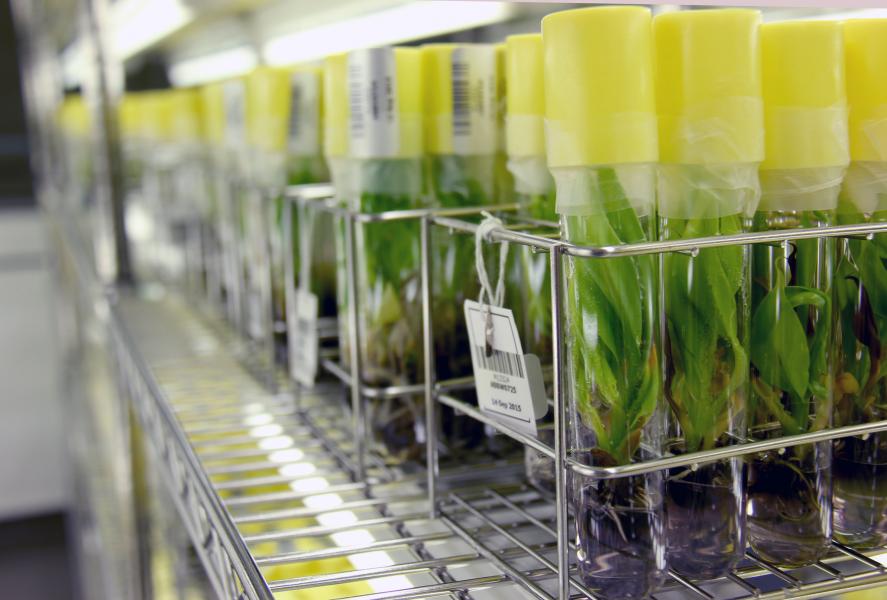 Learn more about our two Genebanks

Our two genebanks interconnect and integrate with the CGIAR Genebank Platform, the largest and most frequently accessed network of genebanks in the world, comprising 11 CGIAR genebanks.