In this month’s DG Dialogues, M. Ann Tutwiler, Director General, Bioversity International, explains how swapping one variety of the most consumed food crops in a diet for another can make all the difference when it comes to delivering the critical minerals and vitamins needed for growth and development.

In this month’s DG Dialogues, M. Ann Tutwiler, Director General, Bioversity International, explains how swapping one variety of the most consumed food crops in a diet for another can make all the difference when it comes to delivering the critical minerals and vitamins needed for growth and development. She focuses on a research initiative in Africa that is applying this approach to the continent’s fourth most important food crop – the banana.

Every region has its national dishes: potatoes in Peru, maize in Mexico, rice in the Philippines or bananas in East and Central Africa. These foods are central to food and nutrition security in these places because they grow easily in local conditions, making them easily accessible and relatively inexpensive. They are good sources of energy (calories) within the diet, and a source of national cuisine and culture.

Historically, research to reduce hunger focused on increasing the yields of – and therefore the calories from – these mainstay crops which often account for 80% of the calorie intake in developing countries. But with 2 billion people suffering from micronutrient deficiencies in the past few years, researchers have begun to focus on how these mainstay crops can also deliver better nutrition and not just more calories.

While diversifying diets is critical to improving nutrition and health, for low-income consumers, producing or purchasing nutrient-rich food is not always easy or affordable. Some of the most publicized interventions include fortification and biofortification of staple crops, such as orange-fleshed sweet potato or golden rice. But there is an alternative approach: finding naturally occurring varieties of these traditional foods that offer high levels of missing micronutrients.

For example, bananas are a major staple food across many parts of the developing world – in Africa, it is the fourth most important food crop. So finding banana varieties with higher content of vitamin A could be part of the solution to this major public health problem. It is estimated that there are over 1000 varieties of bananas in the world. These varieties range from green to pale yellow to orange to dark red. Their shapes vary from large, half-moon shaped bananas; short, fat bananas; and everything in between. The genetic diversity in these varieties determines not just these differences you can see and taste, they also determine micronutrient levels. For example, the orange-fleshed Karat banana contains 1000 times more of the pigment which the human body can convert into vitamin A (carotenoids) than the Cavendish banana, which is the variety of bananas most Western consumers see in their supermarkets.

Bioversity International is conducting research with partners in Burundi and the Democratic Republic of Congo (DRC) to see how we can use this banana diversity to increase the levels of vitamin A in diets.

The first step was to screen more than 400 varieties to identify those with high levels of carotenoids. Bananas are notoriously difficult and expensive to breed, so ‘fast-tracking’ existing vitamin-A rich varieties for testing in this way offers savings of both time and money. Based on these results, we introduced a number of varieties that originated from Asia and the Pacific into East Africa, through the Bioversity International Musa Germplasm Transit Centre (ITC) in Belgium – the world’s largest collection of banana germplasm. Those selected have levels of carotenoids that are high enough to meet a child’s recommended daily needs for vitamin A by eating just one banana. 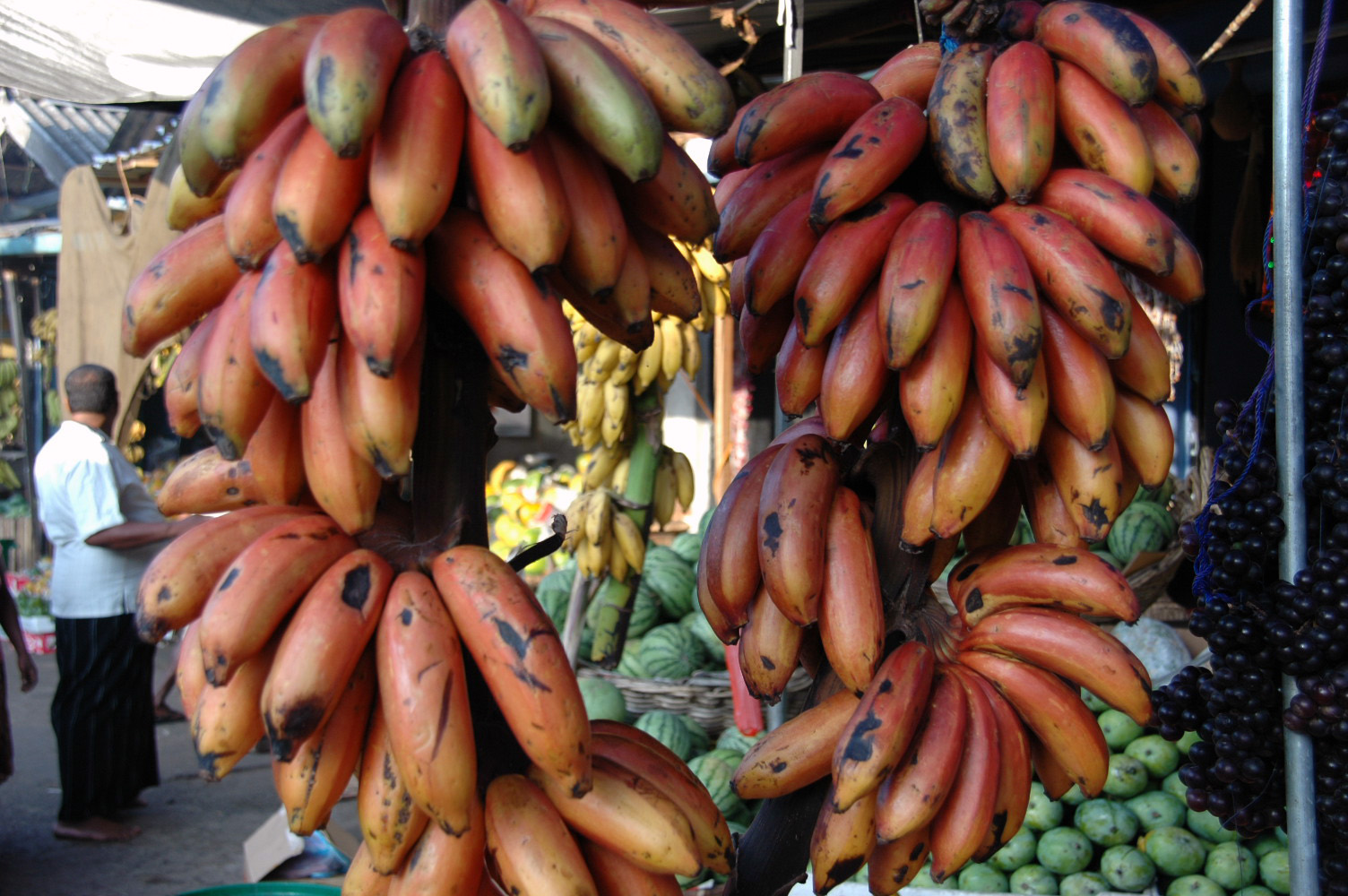 Bioversity International is now testing these varieties across different growing cycles and agroecological zones, as well as in local food dishes. In Burundi and the DRC, Bioversity International researchers mapped the varieties of bananas that people eat, and worked with local communities to better understand how bananas are used by women and men.

Engaging the communities in Bioversity International’s research is critical: introducing a new variety of any staple food into people’s farms and diets will never succeed without a firm understanding if farmers can grow the new variety easily under local conditions; whether people like how it looks and tastes; whether farmers can sell the new variety in local markets; how the new variety suits traditional cooking methods. It is also important to understand how people eat the fruit (raw, fried, boiled, etc.) as different preparations will affect the level of vitamin A.

Initial feedback is really positive in terms of both agronomic performance and consumer acceptance, and more than 5000 community members have now been reached through an extensive training programme.

Based on these results, Bioversity International is planning to expand our research into Kenya, Tanzania and Uganda, testing promising varieties in five locations, over two crop cycles. We would initially engage with around 1500 men and women farmers, with scope to expand much further into these countries, if initial results are positive.

While our research on vitamin A bananas holds great promise, what is particularly exciting is that finding naturally occurring, more nutritious varieties to enhance traditional diets can work on any crop, any nutrient, anywhere in the world, given the right genetic diversity.

By harnessing the naturally-occurring differences in varieties of food crops to nourish people, you are not just bringing more diversity to plate but also to the farming system, which can only be a good thing for sustaining the planet.

This work is carried out through Bioversity International’s Healthy Diets from Sustainable Food Systems Initiative and contributes to the CGIAR Research Programs on Roots, Tubers and Bananas, and on Agriculture for Nutrition and Health. It is supported by HarvestPlus through the Global Challenge Programme. It also contributes to Sustainable Development Goal 2: End hunger, achieve food security and improved nutrition and promote sustainable agriculture; Target 2:1: By 2030, end hunger and ensure access by all people, in particular the poor and people in vulnerable situations, including infants, to safe, nutritious and sufficient food all year round.

Photos:
Left: Orange-fleshed Fe'i bananas from the Pacific are rich in vitamin A precursors and an important source of good nutrition. The picture compares Karat Pwehu, one type of Fe'i banana, with while fleshed Utin Menihle, peeled and unpeeled. Credit: Island Food Community of Pohnpei /L. Englberger

Right: Red bananas for sale at a market in Sri Lanka. Bananas with yellow or orange flesh have more provitamin A than cream-fleshed bananas. Credit: Bioversity International/D. Hunter