Climate change and variability are resulting in reduced and sometimes lost productivity requiring substantial changes in farming practices. Traditional practices involving excessive tillage associated with continuing land degradation contribute to the productivity problem. In addition, the current population growth rate stands at 3%, and this is higher than the food production progression rate of 2%. With such a population growth rate, a large proportion of the expected global population of 7.5B will be hungry unless innovative agricultural practices are employed in order to raise the current food production levels by 25–75%.

In 2003, the International Center for Tropical Agriculture (CIAT) designed a set of long-term trials in Kenya to assess sustainability and productivity effects of a set of management practices. These practices included conservation agriculture (CA), a combination of mulching, reduced tillage, and crop rotation, which has since grown to be widely promoted across Eastern and Southern Africa (ESA) with good results. After fifteen years of consistent assessment, two conservation agriculture technologies involving reduced tillage and residue retention for maize-maize and maize-soybean rotation are among the three systems identified as the most desirable. The selection is based on multiple criteria: 1) yield stability over time, 2) high yields under variable weather 3) profitability and 4) soil carbon maintenance. There is also evidence of real and perceived benefits of CA encountered across time and space under the Sustainable Intensification of Maize-Legume Systems for Food Security in Eastern and Southern Africa (SIMLESA) project especially when CA is implemented consistently for at least four years.

Results from seven years of research across the five countries: Ethiopia, Kenya, Tanzania, Malawi, and Mozambique, implemented under SIMLESA (https://simlesa.cimmyt.org), gave mean yield increases above the conventional till practices of 29% when two of the CA principles (reduced soil disturbance plus provision of soil cover) and 35% when all three CA principles including rotations were applied at the same time. According to Isaiah Nyagumbo, CIMMYT’s SIMLESA Regional Cropping Systems Agronomist, CA systems in low rainfall seasons (<700mm), and in particular the CA sole and rotations systems, significantly increased maize yields by 90 and 95%, respectively. This effect was attributed to improved soil moisture conservation under erratic rainfall conditions. This signifies improved climate change adaptation and resilience under CA systems. In addition, returns to CA investments were most apparent in low rainfall seasons. However, when rainfall exceeded 1300 mm, depressed yield returns from CA of up to 3% were apparent.

A comparative study of tillage systems economics, averaged over a period of 30 seasons, showed that CA is more profitable than the conventional tillage (CT) system with the accrued net benefits being US$278 and US$157, respectively. The higher revenue derived from practicing CA is attributed to reduced labor intensity compared to CT systems. For example, weed control through herbicides application in CA helps to save US$150, which is spent on land preparation and weeding in CT systems. In low rainfall seasons characterized by poor distribution during the first month after sowing, CA systems accrue net benefits worth US$425 relative to US$186 under CT. This is associated with the systems potential to conserve soil moisture before the residue is broken down by organisms in the soil. In addition, when rainfall is well distributed within the season, practicing CA earns 26% more net benefits than CT (See illustration below). 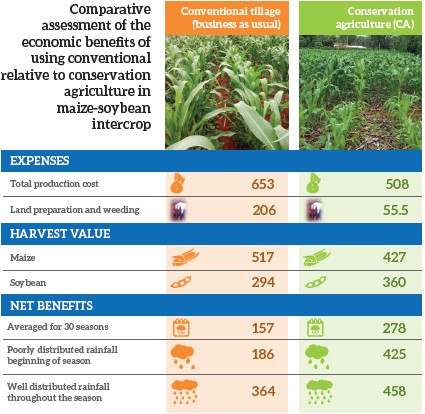 Despite these, we realized some challenges that threatened the performance and sustainability of the CA systems. The rate of residue loss due to breakdown by organisms such as termites is so high that more than half of the residue was gone within the first month of application. This is not unique to East Africa but is also common in southern Africa.

Sussundenga, Mozambique, is a good example. “For three seasons since 2010, we tried to use imported maize residues from elsewhere to our long-term trials at Manica Higher Technology Institute (ISPM) near Chimoio and, in all the three years, it was wiped out within 3 weeks,” said Mr. Custodio Jorge, Conservation Agriculture-based Sustainable Intensification (CASI) agronomist. “Following these challenges, we resolved that the provision of residues in CA in these termite-infested environments could only be achieved through use of in-situ derived live mulches that would not be targeted by termites and not through importing them,” said Isaiah Nyagumbo, CIMMYT’s SIMLESA Regional Cropping Systems Agronomist.

At the same time, our analysis of soil carbon trends in Kenya revealed that even for the CA systems under such high residue losses, soil carbon was declining, only that rates of decline are lower in CA when compared to conventional tillage practices. For these two challenges, we were certain that using live mulch was the way to go. Coincidentally, the SIMLESA implementing team in Mozambique was grappling with the residue loss problem. There was no better time to try the live mulch as soil cover options.

Improved seeds of Brachiaria, Desmodium, and cowpea were shipped to Mozambique from Kenya. We selected germplasm we know can grow under residual moisture. The work was designed in such a way that cover crops would be sneaked late in the season, when rainfall is low.

“Adding these green manures into our existing cereal-legume intercropping is increasing our chances of harvesting one or two of the crops when the season is bad, while, in a normal season, it is providing a staggered harvest,” said Petro Lohay, a farmer in Tanzania. This basically points to the unforeseen climate smartness benefit of the new practice.

“The integration of green manure cover crops is improving systems resilience. The cover crops, introduced as relay, are holding soils, preventing runoff losses, and fixing nitrogen. CA systems with Brachiaria and cowpea are reducing lodging of maize. The roots of the green manure cover crops mesh up with the roots of maize. It was very interesting to see this. We did not expect it,” said Domingos Dias, the Mozambique Institute of Agricultural Research (IIAM) scientist conducting the on-station long-term trials. 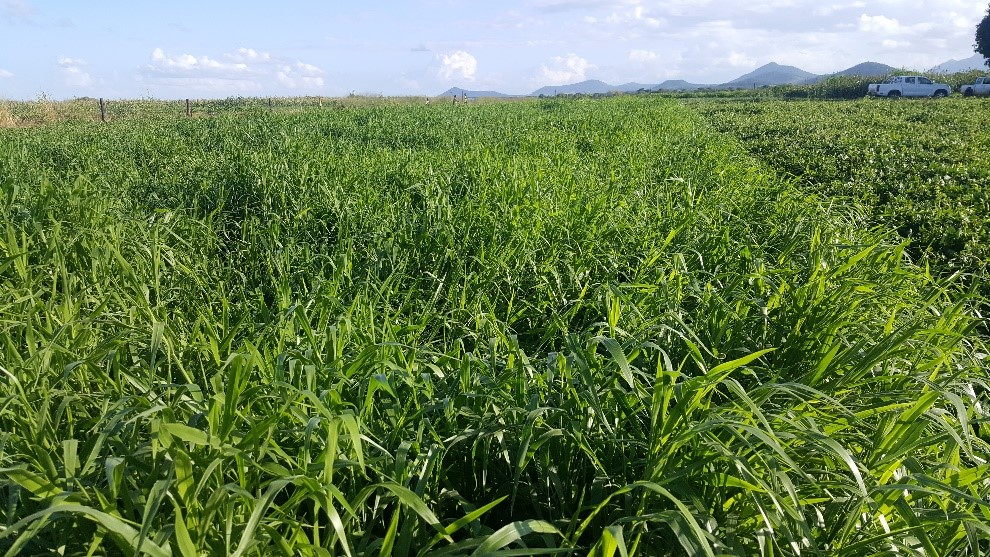 Farmers in Mozambique, like in many other places in Eastern and Southern Africa, grow hybrid and local maize varieties that have variable duration periods. As such, it has been noted that there is need to vary the timing of introducing the relay. Besides, there is need to introduce and test different varieties and crops for utilization as cover crops. With this, Dr. Isaiah Nyagumbo, the project’s Agronomy lead, casts an important caution, “Brachiaria is performing well. However, a different pattern of rotation is needed so that maize does not come immediately after the Brachiaria to ensure the system’s sustainability.”

The success of cover crops will require supporting systems including developing seed systems for these crops and an aggressive transfer of the technologies to farmers through existing extension and Information and Communications Technology (ICT) systems.

This work was supported by the Sustainable Intensification of Maize-Legume Systems for Food Security in Eastern and Southern Africa (SIMLESA) project through a financial grant of the Australian Centre for International Agricultural Research (ACIAR).