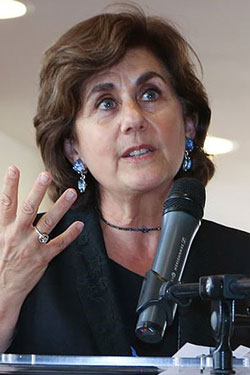 Dr Marion Guillou, a French national, is an independent director of Boards.

She was previously the President and CEO of the French National Institute for Agricultural Research (INRA) for 8 years (2004-2012) and CEO for 4 years (2000-2004). She was responsible for 8,500 employees and a total budget of 830 million Euros. She also has 16 years’ experience with complex national and international contracts and partnerships.

Marion was a member of the High-Level Panel of Experts that is the science-policy interface of the UN Committee on World Food Security (2013-2016); she co-created and then chaired (2010-2013) the Joint Programming Initiative on Agriculture, Food Security and Climate Change (FACCE) that involved 21 countries.

Marion holds a Doctorate in Food Sciences and is a Chartered Engineer. She is also a member of the French Academy of Agriculture, and of the French Academy of Technology. She completed her engineering training at École Polytechnique (promotion X1973) and then specialized in water engineering at École Nationale du Génie Rural, des Eaux et des Forêts (now known as AgroParisTech). She completed a Ph.D. in physico-chemistry of biological processes at Nantes University (UA CNRS).

From 1996 to 2000, she was responsible for the food safety directorate in France and during this time proposed the new French food safety organization (1999 law on food safety). From 2000 to 2012, she was first the CEO, then-President and CEO of INRA where she prioritized research on agriculture, food, and environment. She widened the scope of research topics towards global matters. She put in place interdisciplinary meta-programs, for instance on integrated plant protection or on food consumers’ practices.

From 2008 to 2013, she was the Chair of the Board of the prestigious École Polytechnique and during her mandate, École Polytechnique put a greater emphasis on scientific and technological training. The creation of a new research center on interfaces between biology and engineering sciences was decided and financed.

She has written many scientific articles and chapters of books on food safety, agro-ecological dynamics, and global food and nutrition security, such as ‘The World’s Challenge: Feeding 9 Billion people’ (Ed Springer).