The inputs from farmers, extension services, researchers and NGO staff led to the creation of 'Ushauri' (Swahili for advice). In an automated hotline, farmers use regular phone calls to select and listen to agricultural audio contents. In these messages of 3 to 5 minutes, an extension officer and an experienced farmer explain a specific agronomic topic. In addition, farmers can leave further questions in the hotline. This combines with an online platform: farmers’ questions are sent as voice messages to an online dashboard for registered extension officers to listen to and then send back answers via push-calls. Because the recorded answers are stored online, they can be sent multiple times, to address similar questions from different farmers. Lastly, advisors add keywords to each question. Over time, this allows analyzing and identifying emerging information needs in the farming community.

'Ushauri' is key in a context where extension agents have a heavy workload. Many farmers ask similar questions, for example, about land preparation or seed selection, so a well-recorded answer can be sent from the online platform to any number of farmers.

Advisor-farmer communication through voice messages can increase the efficiency of advisory services, allowing extension staff to answer a higher number of farmers’ questions than through conventional communication channels (phone calls).

In Tanzania (Mtwara region), together with Tanzania Agricultural Research Institute (TARI), Ushauri was tested with 97 groundnut farmers for a month. The service provided information about how to control dangerous aflatoxin (caused by fungi attacking groundnut pods), which if consumed can severely affect human and animal health. During the pilot, farmers made an average of 14 calls per day. Interestingly, farmers’ preferred feature was leaving custom questions:  154 questions were made during the test period.

Ushauri enabled farmers to access relevant information quickly. In many cases, this may be even faster than calling their local extension agents directly, who often cannot respond immediately. Through Ushauri, test users had immediate access to the pre-recorded messages, and received answers to their further questions within less than one day, on average. The farmers who had used Ushauri stated having implemented new practices in an average of 3.6 domains of groundnut production.

Ushauri also allowed extension agents to respond at a self-defined time of the day, reducing the level of phone call interruptions in daily work routine. Furthermore, it reduces the time required by extension agents to answer farmers’ question through telephone calls. In pilot tests, every answer to a farmer’s follow-up question was sent by extension agents to three farmers with the same question, on average. In consequence, farmers who used Ushauri adopted a higher number of new practices than non-users.

The early impact evaluation of Ushauri showed some effects on adoption of recommended practices. On average, users of Ushauri claimed to have implemented a higher number of new practices than non-users. It is not fully clear to which extent this difference can be credited to Ushauri, as social desirability bias may have led to exaggeration. In addition, the farmers had also received in-person trainings about aflatoxin prevention from TARI-Naliendele. In the future, more thorough randomized control trials should disaggregate adoption rates of in-person trained farmers vs. farmers using Ushauri, as well as considering long term effects. 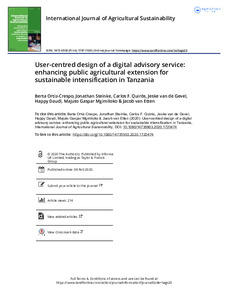 Ushauri has received funding by UK Aid from the UK Government through the Sustainable Agricultural Intensification Research and Learning in Africa programme (SAIRLA).