Agriculture has now become an integral part of the new assessments of the Intergovernmental Panel on Biodiversity and Ecosystem Services (IPBES), whose 2015-2017 work plan was approved at Bonn, Germany last week.

Last week, the Intergovernmental Panel on Biodiversity and Ecosystem Services (IPBES) brought together 130 government representatives and more than 100 stakeholders from the world of environment and sustainable development to Bonn, Germany for its third session (IPBES-3).

Established in 2012, IPBES is the biodiversity and ecosystem services equivalent of the Intergovernmental Panel on Climate Change (IPCC). Like its sister panel, its main aim is to strengthen the science-policy interface on a global issue of vital importance.

Since its inception, scientific experts have been requested to put forward proposals for further research, i.e. commissioned scoping documents that outline the type of geographical or thematic assessments needed, to help policymakers make better decisions with regards to managing biodiversity and ecosystem services. Governments then review these scoping documents, and collectively decide which proposals are the most relevant to carry out.

The agenda for IPBES-3, held from 12-17 January this year, was to approve an ambitious work plan for 2015-2017, including biodiversity and ecosystem service assessments of the world’s regions, and the advancement of two thematic assessments: land degradation, and pollination and pollinators associated with food production.

Two of the scoping documents approved by governments – the regional assessment for Africa and the thematic assessment on land degradation – received direct inputs from scientists under the coordination of the CGIAR research program on Water, Land and Ecosystems. Fabrice DeClerck from Bioversity International and Fred Kizito from the International Center for Tropical Agriculture (CIAT) worked closely with African experts and delegates to define priority topics for the biodiversity and ecosystem service assessment of Africa. Ephraim Nkonya from the International Food Policy Research Institute (IFPRI) co-authored the scoping document for the thematic assessment on land degradation.

Over the past two years, DeClerck has also been actively engaged in crafting the Stakeholder Engagement Strategy that was approved by the delegates in plenary. The aim of the strategy is to increase the diversity of knowledge contributing to IPBES’ work, such as the voices of indigenous peoples and smallholder farmers. Incorporating local knowledge is not only a matter of equity, but also an opportunity to understand how different groups use and value biodiversity and its benefits. 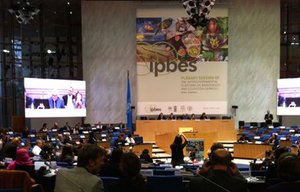 The approved work plan highlights the central role that agriculture plays as a beneficiary and provider of ecosystem services. Both regional and thematic assessments will include for example, detailed analyses on changes in agricultural biodiversity, the food-energy-water-livelihood nexus, and the relationships between environmental health and disease outbreaks.

This is important because biodiversity assessments tend to overlook or not put enough emphasis on agriculture, both in terms of its threats to biodiversity and its contributions to ecosystem service delivery. Pollination for example, which plays a central role in human nutrition and food security, is greatly affected by how we manage agricultural systems and landscapes. A recent study by Stanford University highlighted how a disruption in bee pollination (due to food or habitat loss) can reduce human access to micronutrients from crops such as vitamin A and iron. IPBES’ thematic assessment of pollinators, pollination and food production, which is currently underway, will shed more light on this topic.

In early 2015, IPBES will post a call for authors to assist in the regional, global and land degradation assessments. The pollination assessment has also just announced an invitation for experts to take part in its first review.

All the meeting documents from IPBES-3 can be found here

Learn more about the IPBES Conceptual Framework in PLOS Biology