Out of the two hectares Elmer Bonilla has sown to plantain, avocado, and coffee, he left a plot to sow the 3 kg of biofortified beans he received from the Herveo Municipal Office, in the department of Tolima.

He knows beans; he has previously produced them in his farm, located in the village of Esperanza, but this will be the first time his land will see biofortified beans grow. The day he received the seeds in his own farm, he wrote down carefully on his notebook how he should sow, fertilize, and also what was the potential yield of this variety, BIO102.

“They told us it performed very well and was resistant to pests”, says Elmer, but what really stood out the most to him was that “this bean variety has more nutrients, so it is very important to consume it”.

Elmer is one of over 50 farmers from 23 villages in this municipality of Tolima, who received more than 150 kg of fortified climbing beans and 24 kg of biofortified maize, through the combined efforts of the Coordination Office for Agriculture, Environment, and Tourism in Herveo, HarvestPlus, and the Alliance of Bioversity International and CIAT.

The multiplication of food

When Elmer and his farmer peers received the biofortified beans, they committed to give back 6 kg of their production, which will be distributed among three additional farmers.

“Our mission is to help the project expand and the seeds to reach most of the villages in our municipality, to ensure food for the population, and not just any food, but good quality food. This will also allow them to expand their business horizons, as they will be able to distribute seeds”, said Gissela Pineda, Coordinator for Agriculture, Environment, and Tourism in Herveo.

During the current health emergency produced by COVID-19, HarvestPlus has distributed more than six tons of seed of biofortified crops among smallholders across the country, with the purpose of contributing to a stable production of food during the second half of this year. This effort has been made possible by the joint efforts of over 30 entities, including AGROSAVIA, multiple Municipal Units of Agricultural Technical Assistance (UMATAs, their Spanish acronym), Secretariats for Agriculture, foundations, and other partners.

Distribution of biofortified seeds to small producers throughout the country

It is estimated that in three to four months, some 70 tons of rice, 76 tons of beans, and some 360 tons of biofortified maize will be feeding thousands of smallholders in across the country.

The Colombian local entities are very interested in having farmers being able to sow now, so there will be no future shortages in the country. This is why the production estimates will have a major impact on the food and nutritional security of the rural area and, by ensuring farmers keep on sowing, we will also ensure the food security in the cities.

Biofortified crops are naturally more nutritious crops with a higher content of vitamins and minerals in their seeds. A feature of particular importance during the current contingency, because minerals, such as iron and zinc, are essential for a strong immune system and overall good health. For instance, one serving of biofortified beans can contribute up to 29% and 14% of the daily iron and zinc requirements, respectively, and one arepa [corn patty] made of biofortified maize provides five times as much zinc as one made of commercial maize.

Scientific research has shown that the amounts of these micronutrients found in healthy and diversified diets has a positive effect on the ability of the immune system to neutralize several types of viruses, but not all of them. For example, in the case of zinc, a recent study by Scott A. Read and collaborators indicates that “in the last 50 years, enough evidence has been gathered to show the antiviral activity of zinc against a variety of viruses, and via numerous mechanisms”.

In Colombia, four types of biofortified crops are already available: beans with iron, maize with zinc, rice with zinc, and yam with vitamin A. All these crops have naturally higher contents of vitamins and minerals, compared to conventional varieties. Biofortified crops are produced in Colombia by smallholders, who are part of biofortificados.com, a web platform that gathers all the information about these foods.

The warrior behind seed shipments 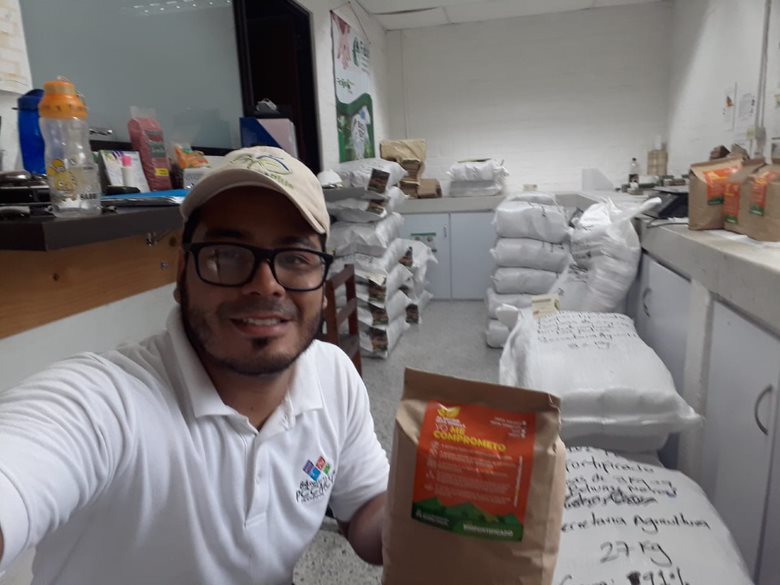 The work of selecting the material to be delivered to producers is carried out by groups of people led by Crhistian Guerrero [warrior in Spanish] in the Regional Office of the Alliance of Bioversity International and CIAT in Palmira, Valle. All of them fully comply with the preventive measures established by the authorities, such as social distancing and frequent hand washing. And despite the exhausting working hours, Crhistian is convinced of the major importance of the contribution he and his colleagues make to secure food production in the country.

“Smallholders contribute to the national and worldwide food security. Food production will have to be almost twice as much in developing countries such as ours, and to feed that population and tackle the existing hunger and malnutrition, we have to support farmers; they will be the only way in which we can meet this increasing demand”, says Guerrero.

How can Colombians get biofortified foods?

The simplest way to do it is through biofortificados.com. This is a web platform gathering all the information on biofortification in Colombia for producers, consumers, and the industry. It is expected that not only rural populations will benefit from naturally more nutritious crops and foods, but the people in the urban areas as well.