Daniel Debouck, a researcher in CIAT’s Genetic Resources Program, received the Order of Leopold, the highest recognition that the Kingdom of Belgium bestows, for his 40 years of scientific work.

In an emotional ceremony held this past Wednesday at CIAT, Jeroen Cooreman, Belgian ambassador to Colombia, made the delivery of the civil decoration granted by royal order “in recognition of the services rendered.”

Daniel Gabriel Debouck was born in Brussels, Belgium, in 1952. He studied agricultural science at the University of Gembloux, and has a doctorate in Agricultural Sciences in Plant Physiology, Ethnobotany, and Plant Ecology. He was a technician with the International Council of Phytogenetic Resources of the FAO for 8 years. 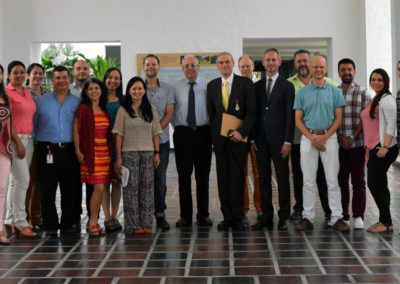 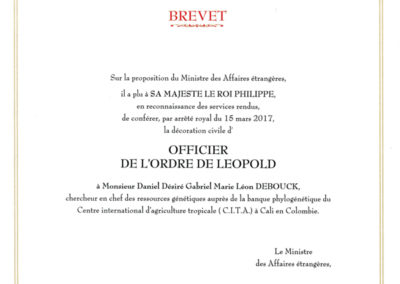 Diploma of the Kingdom of Belgium 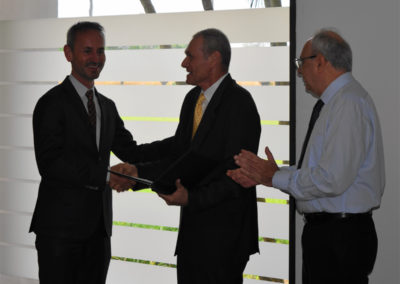 In his nearly 40 years of work, a large part of them as leader of CIAT’s Genetic Resources Program, he has collected 3,900 new varieties of flora in 38 expeditions through 11 countries of Latin America and has discovered 14 new species.

“Daniel Debouck is the world’s expert in Phaseolus germplasm. He is the only expert who has collected across the arc of Phaseolus distribution from northern Mexico to northern Argentina. To him we owe key collections of wild Phaseolus species. Some of the species that he collected are new to science and are key to current and future breeding efforts. Besides his expertise in Phaseolus, Daniel is one of the leading technical experts in agrobiodiversity conservation. We are honored to have him as part of the CIAT staff,” said Joe Tohme, director of the Agrobiodiversity area.

One year ago, the Belgian scientist started his retirement plan, turning over his post to scientist Peter Wenzl. Nevertheless, his untiring work as “guardian of biodiversity” as many call him, has not yet stopped. He is now supporting the initiative to construct the new germplasm bank, Future Seeds, with which more than 80,000 varieties will be safeguarded, making it possible to identify nutritional qualities and traits of resistance to climate change, and contribute to food security. But what is most important for Daniel Debouck is that it will make it possible to build awareness about the importance of biodiversity conservation, since, as he says, “we don’t know what we have, and what we have, we’re losing.”

What is it like to receive this recognition from your country? 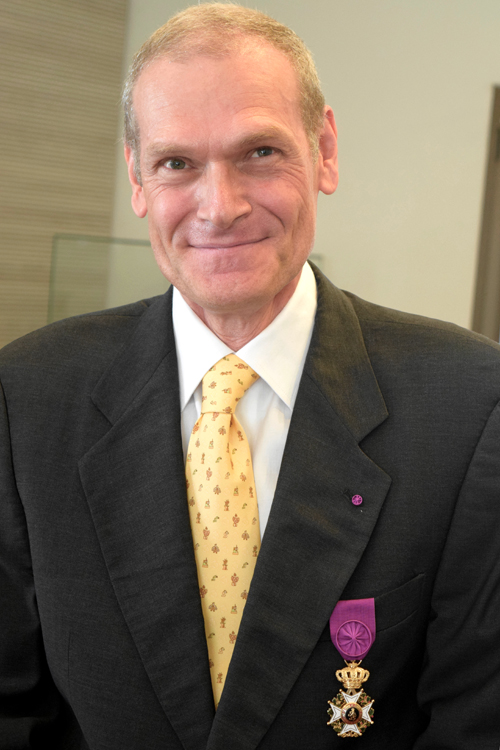 Three elements come to mind. First, this recognition makes me happy, that is clear. To achieve professional goals, doing something useful for society, is doubtlessly a reason for satisfaction. Among other things, for me, discovering new plants made me very happy, and the same fascination continues.

The second element is gratitude toward the institution, the donors, and the colleagues in the countries that had a great deal of patience with me, and who have supported me in various ways, but above all, steadily. We all had the same vision of the future, the same understanding of how demanding the conservation of genetic resources is, and the same willingness to work in order to know and to conserve.

Third, this recognition also goes to a team: what we have achieved in order to conserve part of the patrimony of the countries is not the work of a single person. There is strength in unity, and that is what defines the Belgians. This slogan inspired us and continues to invite us to join our talents together. Genetic resources, diverse by their very nature, offer a magnificent opportunity to cooperate among disciplines, across frontiers, and between epochs.