Cacao growing on a farm in the Department of Guaviare, Colombia. Photo by: Neil Palmer / CIAT

Nearly a year ago, Colombia signed up for the Cocoa & Forests Initiative, making it the first Latin American country to do so. Its commitment: to end deforestation in the Colombian cacao supply chain by 2020.

To meet that goal, the first order of business is to determine the extent of deforestation caused by cacao production in Colombia.

There’s no doubt that in some parts of the globe, cacao farming has led to deforestation. That’s the case of several countries in sub-Saharan Africa and Southeast Asia, as a World Bank report has noted.

But what about Colombia? Results from a recently conducted study by CIAT on the country’s cacao sector tells a different story.

Based on spatial analysis using available information, previous studies, and interviews with value chain actors, the baseline study confirms that cacao cultivation is not a major cause of deforestation in Colombia. Rather, it is a key component of strategies to reduce conflict and, more recently, to achieve forest conservation and land restoration.

Research has shown that municipalities with large-scale cultivation of coca — an illicit crop — experienced more conflict and greater deforestation.

“Although cacao is not a main driver of deforestation in Colombia,” said Castro-Nuñez, “it doesn’t mean we don’t have to work in the cacao value chain in order to prevent it from causing deforestation in the future, as well as to maximize its potential to become a livelihood alternative to farmers inhabiting areas affected by deforestation and conflict.”

Cacao, some believe, has a potential to be a “forest-protecting” crop when it’s located at forest margins and at so-called buffer zones, i.e., areas of land devoted to environmental protection. There’s a need to establish evidence on this, though.

Thus, cacao “could also be a restoration crop,” according to Andres Charry Camacho, a CIAT value chain expert and member of the study team. The impact on restoration, though, he added, is not that considerable given that areas planted with cacao aren’t significant, especially when compared with current areas of degraded lands. 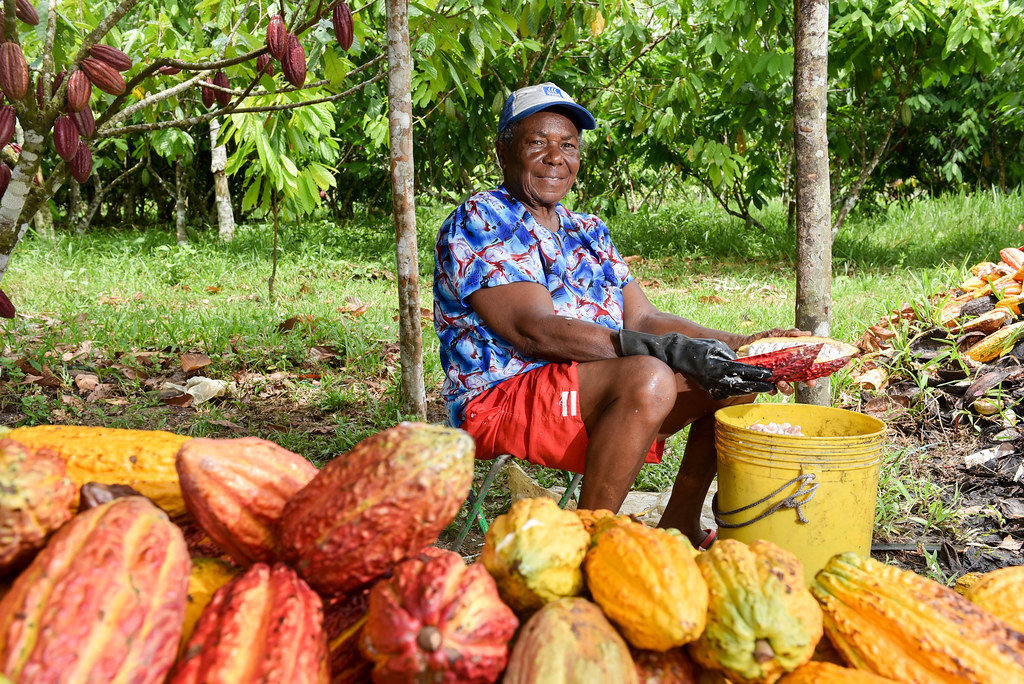 Cacao processing on a farm in the Department of Guaviare, Colombia. Photo by: Neil Palmer / CIAT

Most cacao farms in Colombia have low productivity. Current average is about 450 kilograms per hectare per year, according to data from Fedecacao, the national federation of Colombian cacao growers. That’s below half the approximately 1.2 tons per hectare per year needed to earn sufficient income from cacao farming. In addition, cacao farms on average measure two hectares or less each, half of the estimated 3.5 to four hectares required for families to generate two minimum monthly wages, so that cacao can become an alternative to illegal crops and deforestation, according to Charry.

That said, “there’s also a risk that if you increase production of any crop, there’s also the incentive to take down more trees to make more money,” he added.

The best way for cacao production to become an effective alternative to coca leaf farming, prevent future conflict, and stop deforestation is to ensure its profitability, while introducing and implementing adequate policies and incentives for improving land use, said Charry. To ensure profitability, farms need to be productive, and the commodity must be of good quality because “that’s what most consumers want,” he added.

Castro-Nuñez will discuss the results from and recommendations based on the baseline study at a sideline event of Tropical Forest Alliance Annual Meeting 2019. The meeting takes place May 4-8 in Bogota, Colombia.

“Our study conveys the message that the narrative around cacao and deforestation is not globally homogenous, that it’s not always the case that the crop causes forest loss.” Castro-Nuñez said. “It can, as it seems in Colombia, serve as a tool to achieve zero deforestation and has a potential to curb conflict.”

The baseline study on the state of the cocoa sector in Colombia is funded by the World Research Institute, World Cacao Foundation, and the SLUS project, which is funded by the German government’s International Climate Initiative (IKI). It informs the development of the Cocoa, Forest and Peace initiative’s action plan.