Terra-i – the tracking database which flags deforestation – is going to Asia.

The online mapping tool has checked the pulse of habitat health in Latin America since 2012, transforming real-time data every two months into habitat-change maps.

Now, it will do the same in the forests of Borneo in Indonesia and throughout Southeast Asia.

The data-collection effort has come at a crucial time as carbon markets develop and Terra-i can help decision makers get a handle on baseline deforestation rates – a timely topic in the aftermath of COP21, where many countries signed up to emission reduction commitments.

Using real-time rainfall data to predict how green a habitat should be, the tool takes satellite images of that habitat on earth and matches the prediction with the image, in pixel-by-pixel sections. The difference between how green habitats should be according to rainfall projections – and how green they are on the ground – indicates vegetation change and possible deforestation.

The Terra-i team in Asia will now start validating data it so that it matches what’s actually on the ground. This will be done by selecting random pixels detected as deforested, then checking on the ground by physically going to the field or using available satellite imagery to produce detailed maps of change.

Lisette Phelan, carbon-insetting specialist in CIAT Asia’s office, said: “Given that countries have already – or are mandated to – commit to emission reductions since COP21, this is timely to give an idea of current emissions, and how gains could be made through reforestation or avoided deforestation.”

“In a nutshell, if governments are aware of the rate of deforestation, they can estimate the costs of reducing carbon emissions through protection of forestland or avoided deforestation,” she said.

At the same time, if the private sector actors are aware of deforestation rates, they can reduce carbon footprints, or those of their commodity, she added.

In Indonesia, where “haze” plumes of smoke since September last year topped average daily emissions in the US, emerging protecting the forests needs to be combined with helping farmers earn a living so they don’t destroy the forest.

Engaging in, or incentivizing smallholder farmers to conserve forestland through direct or in-kind payment, companies can generate carbon credits to offset their footprint, says Phelan. “Those reductions can be used as part of corporate strategies, demonstrating to customers that they are contributing towards environmental protection and natural resource conservation.” 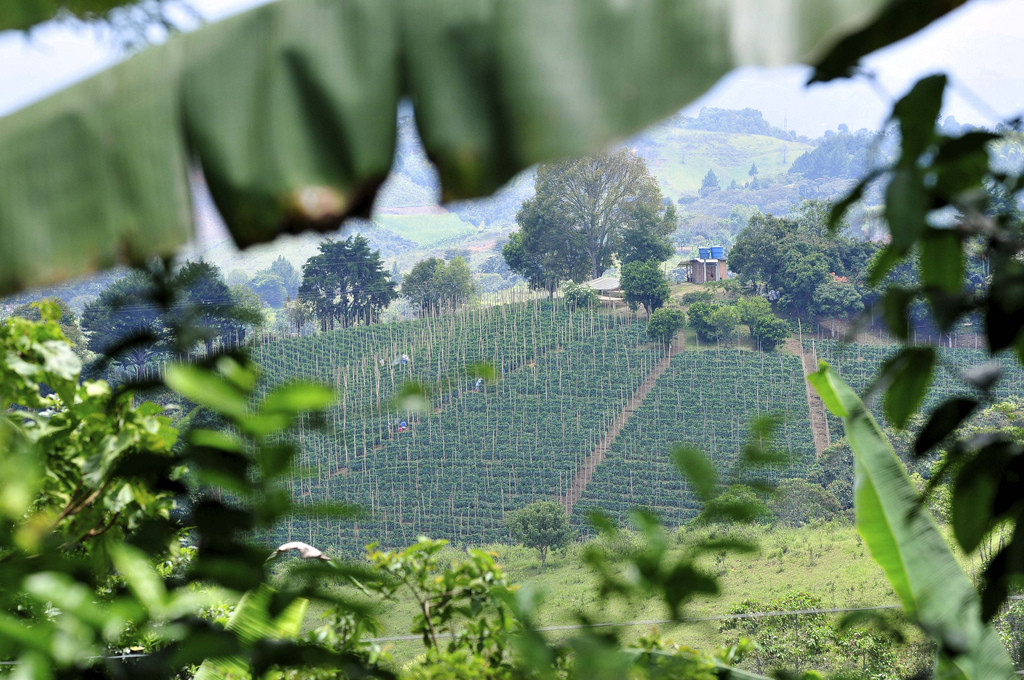 Southwestern Colombia, where some farmers are already feeling the effects of climate change. Credit: N.Palmer / CIAT.

Since it was launched in 2012, the tool has proven powerful in Latin America. In Peru, it’s being used by the Ministry of Environment as the official early-warning system for land cover and land-use change, producing a monthly update or alert system and pin-pointing deforestation hotspots.

While surprises like this are less likely to occur today, given the sheer amount of satellite and other data freely available online, the power of Terra-i has since evolved.

Deforestation data from both Africa and Asia is already in the Terra-I database, but not available to download until it has been checked and validated by the team on the ground.

“Terra-i provides us with an opportunity to quantify the rate and extent of deforestation at near real-time and at a resolution that’s useable for policy makers throughout Southeast Asia,” said Louis Parker, CIAT’s Geographic Information Systems Specialist in Hanoi.

“Once deforestation is monitored and measured, national governments can introduce policies to reduce deforestation. This can be done through economic and educational means, and requires working closely with the local communities to keep trees in the ground,” he added.

It is possible to get data at resolutions of 250-meter to 30-meter resolution available in Terra-i. There is also online data updated every year. But the power of Terra-i lies in the fact that not only is it free, it’s updated every 16 days.

The system now has 2,300 registered users, and all the databases are freely available online. Later in the year, the tool will be launched in Africa, where massive deforestation is occurring, for example in the Congo Basin.

Although Africa has a lower deforestation rate than Asia and Latin-America, implementing monitoring systems such as Terra-i now could avoid industrialized “deforestation booms” as observed in other part of the tropics, the research team says.

“This tools can really help decision makers see the magnitude of change – and the large-scale nature of deforestation, even if they were already aware about it before,” said Louis Reymondin, Terra-i’s developer leading the research team.

Terra-i is the result of years of collaboration between CIAT, Kings College London and the University of Applied Sciences of Western Switzerland (HEIG-VD). It is funded by The Nature Conservancy, The World Resources Institute, Global Forest Watch and the CGIAR Research Program on FTA.

Maps can be found online (www.terra-i.org) and offline on tables or smartphones (https://geodata.policysupport.org/terra-i). Terra-i will expand to Africa later in the year.

In order to provide concrete evidence for future applications of Terra-i in Southeast Asia, three case study areas have been selected: Indonesia, Vietnam and Laos. These countries have experienced very different land use change trajectories during the past few decades and could provide a range of spatial analyses through the Terra-i tool. There are huge opportunities for land use change to be better monitored, enabling the main drivers of these large-scale changes to be understood and tackled. For more information about how to contribute to this opportunity download this Factsheet.

In Indonesia, Terra-i is expected to help the public and private sector monitor land use change associated with agricultural production, tracking encroachment onto forestland which could lead to deforestation. In particular, the tool could be of interest and relevance to the cocoa sector, where it could be used at a sectoral, precompetitive level by industry actors. For example, those engaged in the Sustainable Cocoa Production Programme (SCPP) – to monitor the impact of their cocoa bean sourcing strategies on the environment, in terms of their contributions to land degradation, deforestation and to greenhouse gas (GHG) emissions at a national level. To find out more about the opportunities to tackle deforestation and build more sustainable supply chains in Indonesia, download this Factsheet.