Smallholder dairy farming continues to thrive in rural and peri-urban households in East Africa. Thanks to the tangible wins, farmers have derived over time milk, manure, and financial income, among other benefits. However, feeding the animals is akin to Napier grass, courtesy for its high biomass production and withstanding frequent cutting. What then would make farmers embrace the use of Brachiaria vis-a-vis Napier grass, which they are more familiar with? The answer lies in the tangible wins of Brachiaria that need to at least match or outdo those of Napier grass.

A visit to several smallholder dairy farmers in Meru was evidence enough that Brachiaria does not only stand a chance against Napier grass but it is already making the difference in cows’ diet and production.   Rachael has six confined cows and feeds them with maize silage, desmodium, sweet potato vines, Napier grass, and Brachiaria hybrids. Although silage takes the largest proportion, Brachiaria hybrids are at an equal proportion with Napier grass, sweet potato vines, and kikuyu grass despite only having started growing Brachiaria a year ago, and she aims to plant more Brachiaria. When asked why she would spread Brachiaria and not Napier grass, she emphasizes that Brachiaria has increased milk production of her cows by at least 1¼ liters per day per animal. At peak production, she is able to deliver 160 liters of milk from her farm for six cows daily. 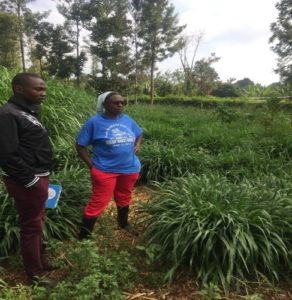 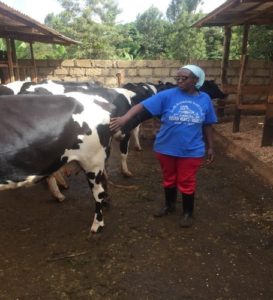 Rachael and Fredrick at Rachael’s Brachiaria field on the left, and on the right, Rachael with her Friesian cows in Meru

In this area of Meru, Napier grass is sadly affected by Napier grass head-smut disease that reduces forage yields. As such, Brachiaria offers an alternative for dairy producers capable of sustaining milk production as witnessed by these farmers. 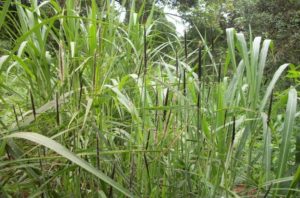 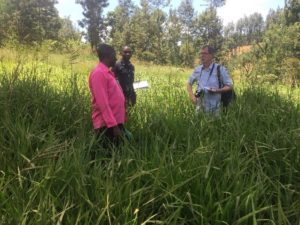 Napier grass heavily smutted on a roadside farm in Meru. On the right, Timothy accompanied by Fredrick and Uwe from SNV and CIAT respectively at Timothy’s Brachiaria field.

In a recent farmers’ field day held at Kaguru Agricultural Training Center in Meru, farmers were inquisitive about Brachiaria forage and showed increased interest in accessing seeds for trial in their farms. With awareness and seed availability, it is most likely Brachiaria adoption will go up and prove its ability to contribute in milk production. 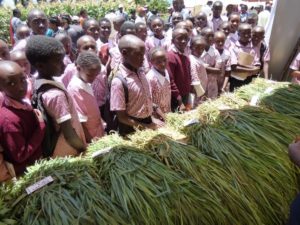 School children inquisitive about the forages grasses that can be fed to cattle.