Recent findings evidenced that when forests are in the hands of local communities, governance, conservation and livelihoods improve.

Recent findings evidenced that when forests are in the hands of local communities, governance, conservation and livelihoods improve.

Reform advocates claim that local communities are better stewards of forests than the state, particularly in settings where understaffing and other limitations do not allow government agencies to live up to their mandate. There is increasing evidence that the devolution of rights to forest communities leads to a decrease in deforestation rates, better protection of biodiversity, and significant livelihood benefits of community members, especially if linked to the development of community forest enterprises.

Bioversity International and partners are contributing to this evidence base through large-scale socioeconomic surveys in the Petén region of Guatemala where 25-year forest concessions have been granted to the communities in the late 1990s. Bioversity scientist Dietmar Stoian, who has led this research since 2014 says, "For the first time there is a complete socioeconomic data set across the nine active concessions, which show that, if carefully managed, the community concessions allow local people to move out of poverty while conserving the forest and its inherent biodiversity. While we observe significant variation across and within the concessions, community stewardship of the forest resources has proven to be a viable model for forest conservation and livelihoods development."

As the community concessions need to undergo renewal over the next few years, Bioversity International, Center for International Forestry Research (CIFOR) and Asociación de Comunidades Forestales de Petén (ACOFOP) - the umbrella organization of forest communities in the Petén - organized a workshop in September. Over 40 researchers, practitioners, and policy makers, attended the workshop to take stock of existing evidence of the concessions' environmental and socioeconomic performance and to discuss options going forward. 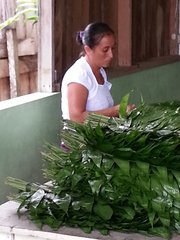 CIFOR scientist Steven Lawry explained in an interview with Forests News that the approach has produced positive results: “Deforestation rates within the concessions are markedly lower than in surrounding areas. Employment has increased, and community members receive dividends from timber sales.” What is more, the resident forest communities are now able to make an income also from regulated hunting, collecting non-timber forest products, farming, and working off-farm. The diversification of their income sources contributes to their improved livelihoods by providing greater stability and food security.

This research has been supported by the Austrian Development Agency (ADA) with funding by the Austrian Development Cooperation (ADC). It is part of the CGIAR Research Programs on Policies, Institutions and Markets (PIM) and Forests, Trees and Agroforestry (FTA) and is supported by CGIAR Fund Donors. We thank ADA and ADC for their funding and all donors who support PIM and FTA through their contributions to the CGIAR Fund.

Bottom photo: Member of a community forest enterprise grading the leaves of the Chamaedorea palm for export. Credit: Bioversity International/D.Stoian