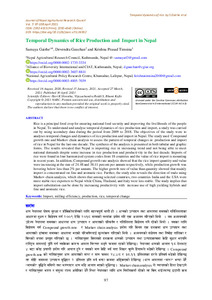 Rice is a principal food crop for ensuring national food security and improving the livelihoods of the people in Nepal. To understand and analyse temporal dynamics of rice production and import, a study was carried out by using secondary data during the period from 2009 to 2018. The objectives of the study were to analyses temporal changes and dynamics of rice production and import in Nepal. The study used Compound growth rate and Markov chain analysis to assess the pattern of temporal changes in production and import of rice in Nepal for the last one decade. The synthesis of the analysis is presented in both tabular and graphic forms. The results revealed that Nepal is importing rice in increasing trend and not being able to meet national demands despite some increase in rice production and productivity in the last decade. Imports of rice were found in four harmonized system codes from 18 countries and the value of rice import is mounting in recent years. In addition, Compound growth rate analysis showed that the rice import quantity and value were increasing at the rate of 24.48 and 38.11 percent per annum respectively, while production growth was hovering below less than 2% per annum. The higher growth rate of value than quantity showed that mainly import is concentrated on fine and aromatic rice. Further, the study also reveals the direction of trade using Markov chain analysis, which shows that among selected countries, two countries India and the USA were more stable rice exporters to Nepal while China, Thailand, and Italy were less stable. The study implies that import substitution can be done by increasing productivity with increase use of high yielding hybrids and fine and aromatic rice