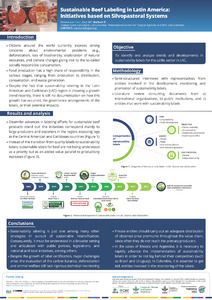 Scientific research is increasingly conclusive regarding the responsibility of food production in environmental issues, a situation that contrasts with greater consumer awareness. In this regard, sustainability seals for meat have emerged, which offer guarantees that production is based on principles of e.g., animal welfare, zero-deforestation, or carbon neutrality. Since research on this subject is scarce, we aim to identify and analyse developments of this type of labeling in Latin America and the Caribbean through a qualitative-descriptive study based on primary and secondary sources. The results show that although the conditions in the region are favourable for the development of sustainable meat labeling, progress to date has not been significant. The development is uneven, the labels identified correspond mainly to large producers and exporters in the region, with particularly noticeable lags in Central America and the Caribbean. Even countries with a strong livestock tradition, such as Brazil, Uruguay, Argentina, and Mexico, show differences between them. While Brazil and Uruguay promote labeling, the others rely on traditional production, since quality criteria currently in place are still sufficient to maintain market shares. In Colombia, however, producers seem to have understood that sustainability is gradually acquiring greater value providing opportunities to position their products nationally and abroad. Another regional characteristic is the absence of a coordinating element: initiatives have begun spontaneously and gradually in different contexts and lack institutions or mechanisms that facilitate feedback. Among the positive aspects, Uruguay and Brazil demonstrate collaboration among public and private institutions, in addition to the involvement of independent certifying bodies. This is fundamental when it comes to guarantees for the consumers and good governance. However, in these countries, as well as Colombia and Argentina, exclusive private labeling strategies continue, which can be affect reliability. There is a diversity of seals in the market, which and makes it difficult for consumers to differentiate between those that do or do not have rigorous certification processes. Despite these challenges, the transition towards sustainability is inevitable. This process will, however, not happen spontaneously but must be coordinated with other strategies and the actions of the numerous actors involved in the sector.