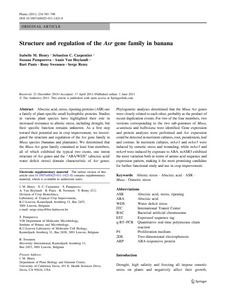 Abscisic acid, stress, ripening proteins (ASR) are a family of plant-specific small hydrophilic proteins. Studies in various plant species have highlighted their role in increased resistance to abiotic stress, including drought, but their specific function remains unknown. As a first step toward their potential use in crop improvement, we investigated the structure and regulation of the Asr gene family in Musa species (bananas and plantains). We determined that the Musa Asr gene family contained at least four members, all of which exhibited the typical two exons, one intron structure of Asr genes and the 'ABA/WDS' (abscisic acid/water deficit stress) domain characteristic of Asr genes. Phylogenetic analyses determined that the Musa Asr genes were closely related to each other, probably as the product of recent duplication events. For two of the four members, two versions corresponding to the two sub-genomes of Musa, acuminata and balbisiana were identified. Gene expression and protein analyses were performed and Asr expression could be detected in meristem cultures, root, pseudostem, leaf and cormus. In meristem cultures, mAsr1 and mAsr3 were induced by osmotic stress and wounding, while mAsr3 and mAsr4 were induced by exposure to ABA. mASR3 exhibited the most variation both in terms of amino acid sequence and expression pattern, making it the most promising candidate for further functional study and use in crop improvement