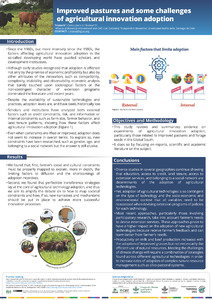 Since the 1960s, but more intensely since the 1980s, the factors affecting agricultural innovation adoption in the so-called developing world have puzzled scholars and development institutions. Although early studies recognised that adoption is affected not only by the promise of economic profitability but also by other attributes of the innovation, such as compatibility, complexity, trialability, and observability, economic analysis that barely touched upon sociological factors or the non-contingent character of extension programmes dominated the literature until recent years. Scholars and institutions have analysed both external factors such as credit constraints, risk, and information or internal constraints such as farm size, farmer behaviour, and land tenure patterns, showing how these factors affect agricultural innovation adoption. Yet, even when constraints are lifted or improved, adoption does not seem to increase in overall terms. To explain so, new constraints have been researched, such as gender, age, and belonging to a social network but the answer is still elusive. This study reviews and summarises evidence on experiments of agricultural innovation adoption, particularly those related to improved pastures and forage seeds in the Global South. We found that, first, farmer’s social and cultural constraints must be properly mapped to explain, more in depth, the limiting factors to diffusion and the shortcomings of adoption incentives. Second, we found that perfectible transference strategies lay at the core of agricultural technology adoption, and thus we aim to amplify the debate onto how to map societal constraints and how, if so, new narratives and mechanisms should be put in place to achieve more successful innovation processes.