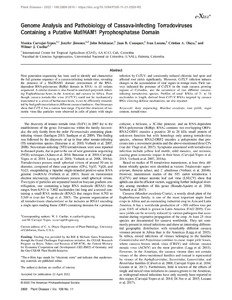 Next generation sequencing has been used to identify and characterize the full genome sequence of a cassava-infecting torradovirus, revealing the presence of a Maf/HAM1 domain downstream of the RNA-dependent RNA-polymerase (RdRp) domain in RNA1 in all isolates sequenced. A similar domain is also found in unrelated potyvirids infecting Euphorbiaceae hosts in the Americas and cassava in Africa. Even though cassava torrado-like virus (CsTLV) could not be mechanically transmitted to a series of herbaceous hosts, it can be efficiently transmitted by bud graft-inoculation to different cassava landraces. Our bioassays show that CsTLV has a narrow host range. Crystal-like structures of isometric virus-like particles were observed in cells of plants with single infection by CsTLV, and consistently induced chlorotic leaf spots and affected root yields significantly. Moreover, CsTLV infection induces changes in the accumulation of total sugars in storage roots. Field surveys indicated the presence of CsTLV in the main cassava growing regions of Colombia, and the occurrence of two different cassava-infecting torradovirus species. Profiles of small RNAs of 21 to 24 nucleotides in length, derived from CsTLV RNAs targeted by cassava RNA silencing defense mechanisms, are also reported.