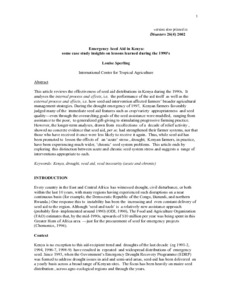 This article reviews the effectiveness of seed�??aid distributions in Kenya during the 1990s. It analyses the internal process and effects, i.e. the performance of the aid itself as well as the external process and effects, i.e. how seed�??aid intervention affected farmers�?? broader agricultural management strategies. During the drought emergency of 1997, Kenyan farmers favourably judged many of the immediate seed�??aid features such as crop and variety appropriateness and seed quality �?? even through the overarching goals of the seed assistance were muddled, ranging from assistance to the poor, to generalised gift�??giving to stimulating progressive farming practice. However, the longer term analyses, drawn from recollections of a decade of relief activity, showed no concrete evidence that seed aid, per se, had strengthened their farming systems, nor that those who have received it once were less likely to receive it again. Thus, while seed aid has been promoted to lessen the effects of an �??acute�?? stress, drought, Kenyan farmers, in practice, have been experiencing much wider, �??chronic�?? seed system problems. This article ends by exploring this distinction between acute and chronic seed system stress and suggests a range of interventions appropriate to each