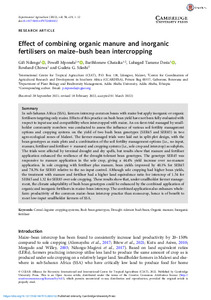 In sub-Saharan Africa (SSA), farmers intercrop common beans with maize but apply inorganic or organic fertilisers targeting only maize. Effects of this practice on bush bean yield have not been fully evaluated with respect to input use and compatibility when intercropped with maize. An on-farm trial managed by smallholder community members was conducted to assess the influence of various soil fertility management options and cropping systems on the yield of two bush bean genotypes (SER45 and SER83) in two agro-ecological zones of Malawi. The farmer-managed trials were laid out in split-plot design, with the bean genotypes as main plots and a combination of the soil fertility management options (i.e., no input, manure, fertiliser and fertiliser + manure) and cropping systems (i.e., sole crop and intercrop) as subplots. The trials were affected by terminal drought and dry spells, but results show that manure and fertiliser application enhanced the resilience of the drought-tolerant bean genotypes. The genotype SER45 was responsive to manure application in the sole crop, giving a 44.4% yield increase over no-manure application. In sole cropping with fertiliser plus manure, bean yields improved by 40.1% for SER45 and 78.3% for SER83 relative to the no-input control. Although sole cropping had higher bean yields, the treatment with manure and fertiliser had a higher land equivalence ratio for intercrop of 1.54 for SER45 and 1.32 for SER83 over sole cropping. These results show that, under smallholder farmer management, the climate adaptability of bush bean genotypes could be enhanced by the combined application of organic and inorganic fertilisers in maize–bean intercrop. The combined application also enhances whole-farm productivity of the common maize–bean intercrop practice than monocrop, hence is of benefit to most low-input smallholder farmers of SSA.