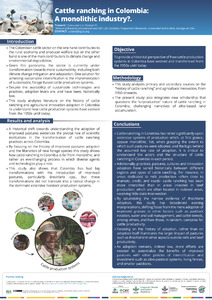 The Colombian cattle sector on the one hand contributes to the rural economy and producer welfare but on the other hand is one of the main contributors to climate change and environmental degradation. Given this panorama, the sector is currently under transformation towards more sustainability, including both climate change mitigation and adaptation. One solution for achieving sustainable intensification is the implementation of sustainable, forage-based cattle production systems. Despite the availability of sustainable technologies and practices, adoption levels are low, however. This study analyses literature on the history of cattle ranching and agricultural innovation adoption in Colombia to understand how cattle production systems have evolved from the 1950s until today. Departing from new scholarship that has questioned the idea that cattle ranching has been only a land-grabbing strategy dominated by few elites, this article focuses on the adoption of improved pastures and the role of key institutions in the transformation of practices and the shortcomings of technification. It shows that Colombia has had big transformations with the introduction of improved pastures, particularly Brachiaria spp., but these transformations did not translate into a radical change in the dominant extensive livestock production systems. Instead of promoting intensification, the adoption of Brachiaria has allowed producers to expand more, often resulting in high levels of deforestation. One of the main contributions of this article is the analysis of economic, developmentalist, and institutional reports that are not often used to construct historical analysis. It can also serve to scholars interested in the adoption of agricultural techniques.