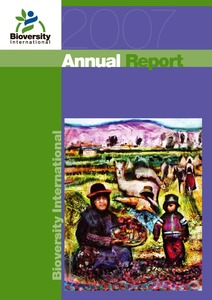 Bioversity went into 2007 in a less-than-optimal financial position. A combination of unforeseen circumstances, which reduced our expected income, left us below the recommended level of reserves. But the organization was well prepared, and we are very pleased to be able to report that we ended the year in an even better position than anticipated. This was no accident. It was the result of careful planning, support from the Board, sympathetic yet firm management, and the willingness of all staff to make sacrifices and contribute to the greater good. The organization as a whole is stronger for their efforts; we would like here to acknowledge their contributions, which make Bioversity what it is. Despite the difficulties, 2007 was as productive a year as any in Bioversity's history, as can be seen from the achievements and stories in this annual report. Long-standing areas of work continued to deliver important outcomes. In policy, for example, Bioversity represented the CGIAR through the System-wide Genetic Resources Programme and helped the Governing Body of the International Treaty on Plant Genetic Resources for Food and Agriculture to see the wisdom of allowing the CGIAR centres to use the Standard Material Transfer Agreement for all material distributed from centre genebanks, not just crops on Annex 1 of the Treaty. And projects that came to a close, for example on leafy vegetables and on seed systems in the Sahel, were judged to have had beneficial impacts. These impact studies will help to secure further support to extend the projects. Our research on climate change and agricultural biodiversity and on policyoriented work on the importance of home gardens in Europe to conservation efforts attracted considerable interest from the press. We hope that this will help to influence global and regional priorities. The sharpened focus areas of our work, adopted in 2006, have started to show through in the project portfolio. The past year saw the launch of many new projects; we report on one that is measuring nutritional quality at the level of varieties, and another that makes use of biodiversity to combat pests and diseases. We now have fewer, larger projects, with wider impact, just as foreseen when we adopted our new strategy. The past few years have been a period of change and adaptation, and the organization is now poised to move forward. As we do so, we note that the world faces considerable challenges. Malnutrition remains a huge problem. Climate change influences many aspects of farming systems and their adaptability and sustainability. Other challenges include emerging pests and diseases, the survival of crop wild relatives, water use and the use of biofuels. Bioversity will work to ensure that agricultural biodiversity plays a role in meeting these challenges and also to ensure that other well-meaning efforts to cope with changing circumstances do not needlessly threaten the agricultural biodiversity on which a sustainable future depends