20 countries’ combined experiences have helped identify solutions to both conserve biodiversity and mitigate climate change, while meeting food security goals. In this conversation with scientist and new brief co-author Sarah Jones, we explore why it’s not too late to act.

Sarah Jones: “With this brief, we wanted to convey the urgent need to conserve biodiversity. Climate change has rightly received a lot of attention over the last decade, partly because the effects are already being felt; whereas biodiversity loss is not so easily noticeable, and a lot of its impact will be gradual. Extinction of one species might not change much, but the cumulative effects will be disastrous. We can't bring species back once they’re gone.

We all depend on biodiversity for many things, particularly agriculture. A big reason for writing this brief was to highlight that the food production system, since it relies so much on biodiversity, should be taking an active interest in how to conserve it. We rely on ecosystem services like pollination, pest control, soil, nutrient cycling… farmers have been aware of these for a long time. And it’s not out of our control. We have the opportunity right now to try and reverse the situation.

The brief makes it clear that we can make progress towards meeting global targets on both climate mitigation and biodiversity conservation through certain actions that are able to create synergies between these two major challenges.”

By pooling our knowledge, we can inform better policy and practice

Let’s back up and discuss the process that went into this. Somebody reading might be wondering, ‘Here's another global brief talking about how important biodiversity loss is, we need to act now, it's already too late...’ What’s unique here?

“The brief is the product of FABLE - the Food, Agriculture, Biodiversity, Land Use and Energy Consortium. It's a collaborative initiative that includes policy and research institutes from 20 countries, along with international partners, working with local stakeholders to try and develop feasible pathways for food and land systems to achieve sustainability targets by 2050.

This is the largest network that I know of that's bringing together modeling initiatives across countries. I think it’s a big strength of the consortium and also a good approach for trying to solve these problems. It's very difficult to come up with good, integrative solutions, but pooling the ideas and expertise from many countries gives us a better chance.

"These results differentiate from any other modeling initiatives because we are not presenting pathways made by each country in isolation, rather pathways that are globally consistent. That is key, especially when it comes to assumptions on international trade to preserve biodiversity. The notion of the consortium is what allows this interconnection between the different country pathways.”

If you were in a room with a politician right now, what would you want them to know?

There are things we can do: diet shifts are definitely key for improving the situation. Otherwise, livestock and crop productivity in some places are very low; closing yield gaps and making sure that we are able to minimize land used for agriculture is definitely part of the solution.

But a caveat is that industrial methods for increasing productivity are bad news for biodiversity, and for pretty much everything else. Productivity increases need to be done thoughtfully, and we need more research, and farmers’ experiences to tell us, for example: What agroecological practices effectively close yield gaps in different places? Can we use locally-adapted species that are maybe not the most high-yielding but have stable yields over time and can be grown with fewer inputs? Can we try to increase the quality and density of crops and livestock in a certain area so you get more and better harvestable produce? I could go on, but in the end, it's about mimicking and working with nature in how we produce food including to increase productivity.

So for countries trying to meet global targets, what exactly does this translate into?

"The same pattern of actions has been effective in many different places. For example, all the countries that increase their share of land where natural processes predominate, (land where biodiversity is able to thrive relatively undisturbed by humans), have assumed either a decrease or a smaller increase in per capita calorie intake. By also putting constraints on new agricultural land development, increasing crop and livestock productivity, or checking population growth, countries contribute much more to meeting global biodiversity targets and there are often win-wins with food security and climate mitigation targets.

For example, in Mexico, we see a large (72%) increase by 2050 in land where natural processes predominate under one scenario tested, mainly through restoration of abandoned agricultural land to grassland, shrubland and wetlands. The agricultural land was freed up by reducing meat and other animal-sourced products in diets, increasing pasture productivity, plus increasing imports of livestock products. Mexico met their food production targets and was able to cut their greenhouse gas emissions by 28%, even though they lost 0.7 Mha forest cover.

One thing to note is that countries have had a first go here at coming up with ambitious sustainability scenarios, working with the local stakeholders to understand what's realistically possible. In many countries, results are now being discussed with national stakeholders and this is opening the door for new discussions about what’s possible and whether more ambitious pledges and actions can be considered. A high level of ambition will be needed in all countries to achieve the full spectrum of targets that we're aiming for as a planet.”

From commitment to action: who has a role to play?

Over the last year, we witnessed a lot of international conferences like (UN Biodiversity) COP15 and (Climate) COP26. To what extent are these working, and what would you say to somebody who's questioning the progress that's being made?

“The recent IPCC Climate Report flagged our progress – it is too slow. We are already at the threshold for mitigating the worst damage.

But actions are happening, and that's really good. Governments even coming together to make these pledges last year for COP26, and COP15 for biodiversity, are very positive and they are ambitious, so that's promising.

I am hopeful 2022 will bring about real change. It's our last chance, really. We've been hearing that for a couple of years now, and I think it's really true, it's our last chance now to halt the negative impact that us humans are having on other species.

Political commitments need to follow through with strong ambitious actions that help shift food systems towards more sustainable outcomes. Politicians need to get behind that agenda, not just in words, but also in actions – with public investment to support farmers and consumers so they are able to afford, have the knowledge and skills, and are incentivized to make the shift towards, sustainable food systems. As consumers and producers, we need to be engaged and take an active part too.”

You mentioned the role of politicians, consumers, and producers. How about scientists?

“Outputs like this brief show that science has an important role to play in finding solutions. The brief is based on data and models; by working with national stakeholders in 20 countries and international teams to put together reasonable projections of which ambitious actions could be taken in different places, scientists were able to find an optimistic but feasible roadmap for achieving global biodiversity, climate mitigation and food production targets by 2050.

The actions being suggested in all these different places and their combined potential impact are showing us, ‘Okay, we can make real progress here in reversing the biodiversity crisis’.  Scientific research and science-policy interactions are what makes it possible to develop methods, tools and collate data so we can model what might reasonably happen in the future.

At the same time, scientists and national institutes have a role to play in improving existing data on biodiversity; good projections rely on good data. For this brief we’ve used an indicator which identifies land areas around the world where nature is thriving – natural processes predominate - because the area falls into one of BirdLife International’s Key Biodiversity Areas, or the land is relatively undisturbed by humans. Further research is needed, for example, to identify where agricultural and other human-dominated landscapes provide important habitat for biodiversity and should be included in biodiversity conservation planning.  The FABLE Consortium plans to continue working where this brief has left off and support countries in identifying integrated pathways to a more sustainable future.”

This interview has been edited for clarity and length. 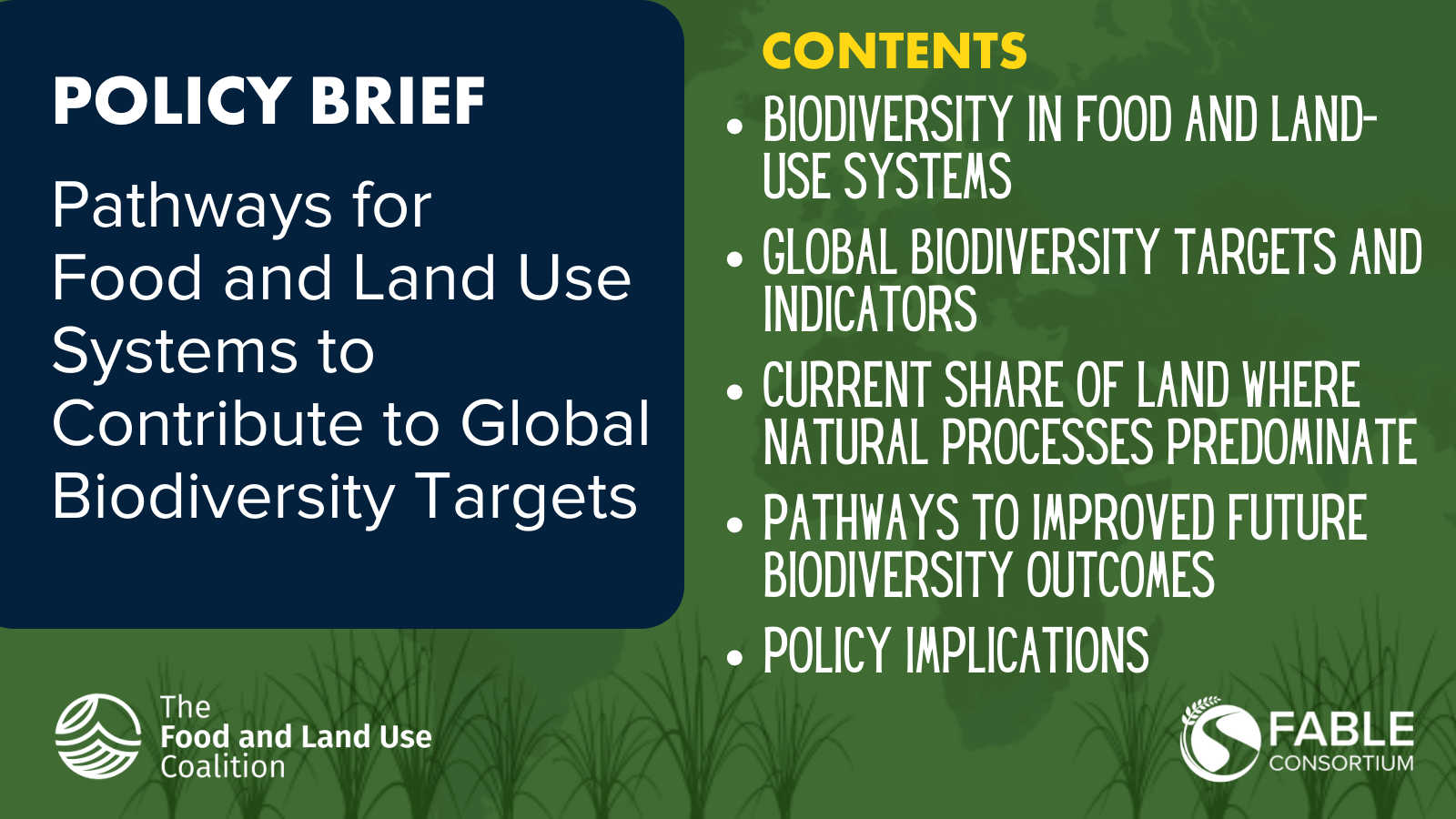 Sarah is a researcher at the Alliance of Bioversity International and CIAT, working on how to produce food in a sustainable way. She leads the biodiversity workstream in FABLE, collaborating with country teams to identify suitable data, indicators and methods for monitoring food and land-use system impacts on biodiversity and vice-versa.

The Food, Agriculture, Biodiversity, Land-Use, and Energy (FABLE) Consortium is a collaborative initiative to support the development of globally consistent mid-century national food and land-use pathways that could inform policies towards greater sustainability. FABLE is convened as part of the Food and Land Use Coalition (FOLU). The Consortium brings together teams of researchers from 20 countries and international partners from Sustainable Development Solutions Network (SDSN), the International Institute for Applied Systems Analysis (IIASA), the Alliance of Bioversity International and CIAT, and the Potsdam Institute for Climate Impact Research (PIK). The authors would like to thank Norway’s International Climate and Forest Initiative (NICFI) as well as FABLE’s other supporters. Learn more here.