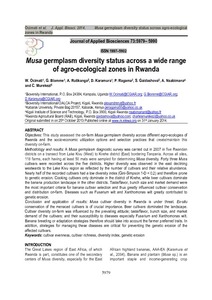 This study assessed the on-farm Musa germplasm diversity across different agro-ecologies of Rwanda and the socio-economic utilization options and selection practices that create/maintain this diversity on-farm. Methodology and results: A Musa germplasm diagnostic survey was carried out in 2007 in five Rwandan districts on a transect from Lake Kivu (West) to Kirehe district (East) bordering Tanzania. Across all sites, 118 farms, each having at least 50 mats were sampled for determining Musa diversity. Forty three Musa cultivars were recorded across the five districts. Higher diversity was observed in the east declining westwards to the Lake Kivu region as reflected by the number of cultivars and their relative abundance. Nearly half of the recorded cultivars had a low diversity index (Gini-Simpson 1-D < 0.2) and therefore prone to genetic erosion. Cooking cultivars only dominate in the district of Kirehe, while beer cultivars dominate the banana production landscape in the other districts. Taste/flavor, bunch size and market demand were the most important criteria for banana cultivar selection and thus greatly influenced cultivar conservation and distribution on-farm. Diseases such as Fusarium wilt and Xanthomonas wilt greatly contributed to genetic erosion. Conclusion and application of results: Musa cultivar diversity in Rwanda is under threat. Ex-situ conservation of the menaced cultivars is of crucial importance. Beer cultivars dominated the landscape. Cultivar diversity on-farm was influenced by the prevailing altitudes; taste/flavor, bunch size, and market demand of the cultivars; and their susceptibility to diseases especially Fusarium and Xanthomonas wilt. Banana breeding or adaptation strategies therefore should take into account the farmer preferred traits. In addition, strategies for managing these diseases are critical in the prevention of the genetic erosion of the affected cultivars