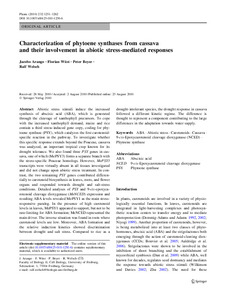 Abiotic stress stimuli induce the increased synthesis of abscisic acid (ABA), which is generated through the cleavage of xanthophyll precursors. To cope with the increased xanthophyll demand, maize and rice contain a third stress-induced gene copy, coding for phytoene synthase (PSY), which catalyzes the first carotenoid-specific reaction in the pathway. To investigate whether this specific response extends beyond the Poaceae, cassava was analyzed, an important tropical crop known for its drought tolerance. We also found three PSY genes in cassava, one of which (MePSY3) forms a separate branch with the stress-specific Poaceae homologs. However, MePSY3 transcripts were virtually absent in all tissues investigated and did not change upon abiotic stress treatment. In contrast, the two remaining PSY genes contributed differentially to carotenoid biosynthesis in leaves, roots, and flower organs and responded towards drought and salt-stress conditions. Detailed analyses of PSY and 9-cis-epoxycarotenoid cleavage dioxygenase (MeNCED) expression and resulting ABA levels revealed MePSY1 as the main stress-responsive paralog. In the presence of high carotenoid levels in leaves, MePSY1 appeared to support, but not to be rate-limiting for ABA formation; MeNCED represented the main driver. The inverse situation was found in roots where carotenoid levels are low. Moreover, ABA formation and the relative induction kinetics showed discrimination between drought and salt stress. Compared to rice as a drought-intolerant species, the drought response in cassava followed a different kinetic regime. The difference is thought to represent a component contributing to the large differences in the adaptation towards water supply.