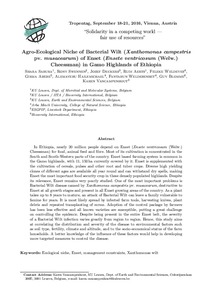 In Ethiopia, nearly 20 million people depend on Enset (Ensete ventricosum (Welw.) Cheessman) for food, animal feed and fibre. Most of its cultivation is concentrated in the South and South-Western parts of the country. Enset based farming system is common in the Gamo highlands, with 11, 150 ha currently covered by it. Enset is supplemented with the cultivation of cereals, pulses and other root and tuber crops. Diverse high yielding clones of different ages are available all year round and can withstand dry spells, making Enset the most important food security crop in these densely populated highlands. Despite its relevance, Enset remains very poorly studied. One of the most important problems is Bacterial Wilt disease caused by Xanthomonas campestris pv. musacearum, destructive to Enset at all growth stages and present in all Enset growing areas of the country. As a plant takes up to 8 years to mature, an attack of Bacterial Wilt can leave a family vulnerable to famine for years. It is most likely spread by infected farm tools, harvesting knives, plant debris and repeated transplanting of corms. Adoption of the control package by farmers has been less effective and all known varieties are susceptible, putting a great challenge on controlling the epidemic. Despite being present in the entire Enset belt, the severity of a Bacterial Wilt infection varies greatly from region to region. Hence, this study aims at correlating the distribution and severity of the disease to environmental factors such as soil type, fertility, climate and altitude, and to the socio-economical status of the farm households. A better knowledge of the influence of these factors would help in developing more targeted measures to control the disease