Soil is more than just a  base to grow plants in: it is a living system where minerals, microorganisms, water, plants and air interact. Optimizing the balance of all these components   will support delivery of environmentally, and ecologically sustainable crop production  whilst an in-balance in one of these elements will mean, soils begin to degrade leading to declining  productivity, and failure to deliver valuable ecosystem services such as carbon sequestration and water cycle regulation, among others. That is why it is so worrying that soils degradation is increasing globally at an estimated rate of 5 to 7 million hectares each year, an area more than half the size of Nicaragua, the largest Central American country.

For a long time, the livestock sector has been considered one of the main culprits responsible for soil degradation, due to  deforestation associated with  land use change to grassland and soil compaction, which occurs when the natural porosity of the soil surface is damaged under the force of a  of a 400 kg animal.

Using improved forages (pastures and legumes) to feed livestock is an approach that addresses the challenge of recovering degraded land and/or conserving the soil, whilst at the same time improving livestock production; this also requires good agronomic management, including practices such as agroforestry, optimal fertilizer application, appropriate grazing density and land-use rotation. These practices allow the soil to develop characteristics of good health such as: the increase of organic matter, good soil structure, deeper water infiltration encouraged by deep rooting grasses, protection against soil erosion, efficient nutrient use and improved biological activity. 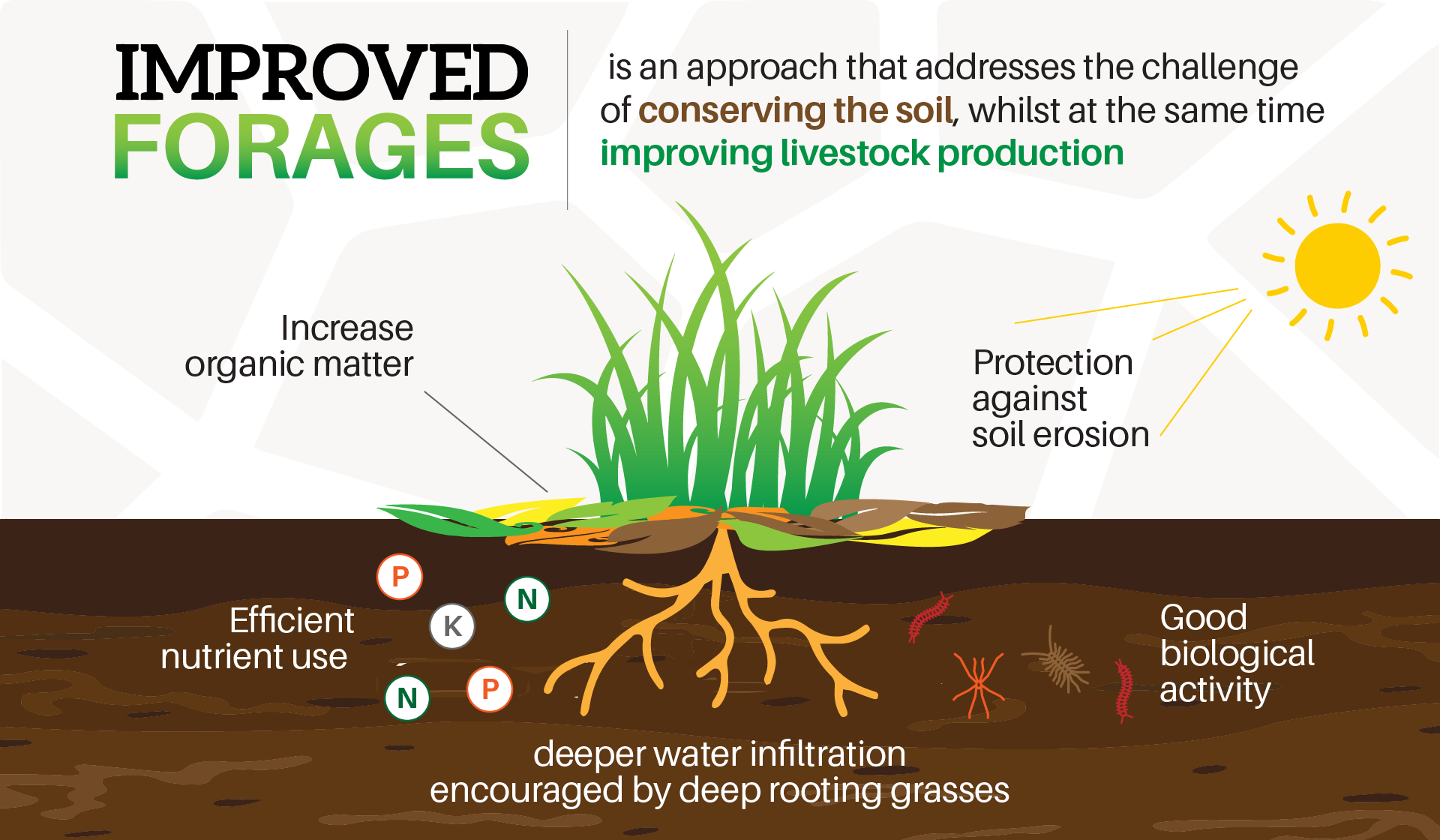 To evaluate these soil health indicators on the farm, comprehensive laboratory analyses can be carried out, but smallholder farmers may be unable to  afford these; that is why at the International Center for Tropical Agriculture (CIAT), in collaboration with Rothamsted Research, we look for mechanisms to adapt these technologies in a simpler way and at lower cost, so that they can be applied by the farmers themselves to evaluate the effect of different varieties of tropical forages and their management on the health of their own farm.

What are the alternatives?

Two of the best known approaches for studying soil health indicators are analyzing the stability of soil aggregates  (clusters of sand, silt and clay particles bound by plant and microbial derived compounds that act like glue  ) and evaluating microbial activity, as a healthier soil generally will have good aggregates stability and a more active microbial community. 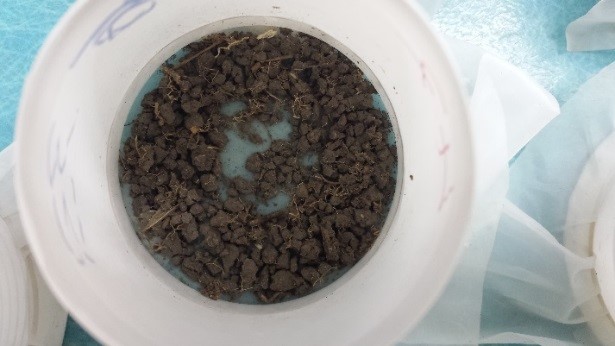 Soil samples sieved in the sieve

The test was carried out by placing the soil samples in a handmade sieve (colander), with a very dense cloth, with a mesh size of 0.05 mm (see figures). The dry soil inside this sieve was submerged in water for 10 minutes to test the stability of theaggregates. This simulates what might happen during a heavy rain event after a period of dry weather. If the aggregates are stable, most of them are kept in the colander, allowing few particles smaller than the mesh to pass through. If, on the other hand, a significant amount of soil is lost through the mesh, this indicates that the soil would be more prone to loss caused by erosion.

The sample on the left is of bare soil (without plants) and the one on the right is of a soil planted with Brachiaria humidicola. In this video (accelerated 6 times), it is clearly seen how the aggregates with improved pasture are more stable than those of a soil without plants.

The soil samples that did not have plants showed much less stable aggregates, indicating a lower soil quality. This also happened in the soil patches without plants left by the growth form in tillers typical of the Mulato and Mombasa pastures and comparing among the forages the soil cultivated with CIAT 679 that was the most stable.

We also compared soil aggregates sowed with Brachiaria humidicola of different ages with soil without plants; for this we took aggregates of approximately 1 cm in diameter and  dried them at room temperature, the aggregates were submerged in water on a  2mm mesh for 5 minutes and scored based on visual observation of the degree of aggregate crumbling over 5 minutes (video).

A very simple method to evaluate the microbial activity of the soil is seeing how fast the microorganisms can decompose tea bags (organic matter). For the evaluation, we buried bags of green tea (easier to decompose) and rooibos tea, which due to its higher content of lignin (a structural carbohydrate of plants), decomposes more slowly, 8 cm deep in the same fields where we performed the aggregate stability test. 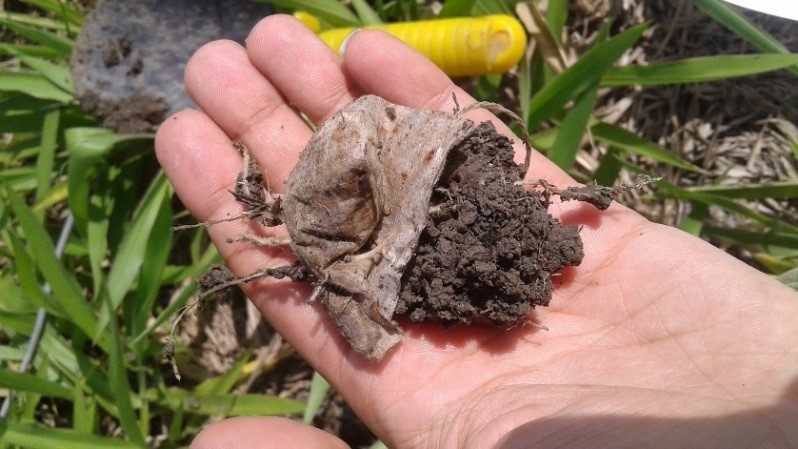 The results of the tea bag test were interesting for both green tea and rooibos tea: in foraged soils, the decomposition of tea bags was faster, suggesting that microbial communities are more active than in soils without plants, as there is a higher content of organic matter, which also gives soils a greater capacity to respond to a new source of nutrients.

In addition, it has been shown that the highest concentrations of soil organic matter are generally related to better soil health, suggesting a more active microbial population and higher nutrient reserves that have the potential to be available for absorption by  plants.

In conclusion, the use of these simple evaluations would allow the farmer to better understand the quality of their soils, without large financial investments, and for timely decision-making. Through daily observations they know the state of their pastures and animal productivity, so they can better manage their pastures with a better recovery of grazing plots, by changing the intensity of grazing, or reducing the time of trampling in the same paddock, ensuring more productive soils in the future.

This study was carried out with the support of the CGIAR Research Program (CRP) Livestock, and its Livestock and Environment Flagship. Similar studies are conducted in Colombia and Costa Rica under the LivestockPlus Project, supported by the CRP on Climate Change, Agriculture and Food Security (CCAFS).