A consortium involving the International Center for Tropical Agriculture (CIAT), the International Institute of Tropical Agriculture (IITA), the Rainforest Alliance, Root Capital, and the Sustainable Food Lab is gaining ground to ensure Ghana’s most important crop — cacao — survives, thrives, and even contributes to reducing greenhouse gas emissions despite climate change.

The organizations are working to promote climate-smart agricultural (CSA) practices for the country’s cocoa farmers. CSA is an approach that enables farmers to produce more while adapting to the changing climate and cutting down GHG emissions. The efforts in Ghana is part of the consortium’s broader goal to ensure CSA goes beyond pilot projects and achieves wider adoption.

Climate change, according to projections, is due to dramatically alter the landscape of cocoa farming in the West African country — currently one of the world’s largest producers of the crop, which is the key ingredient in chocolate. Regions that produce a significant share of cocoa today, like Sunyani in the west of the country, are likely to become unsuitable for cocoa production by 2050 as a result of rising temperatures and changing rainfall patterns.

“You can’t ignore climate change: 2050 is coming quicker than you think, and if you want a solution by then, you need to plan it now,” said Christian Bunn, a postdoctoral fellow at CIAT who is leading the research to define areas that share common climate change hazards so climate adaptation can be achieved at scale.

“Such a proactive stance is particularly important for climate-sensitive crops like cacao, which hundreds of thousands of smallholder farmers in the country depend on as their main source of income,” Bunn continued. “People always say that this or that issue is more urgent, but don’t consider that even if we had heat- and drought-tolerant cacao varieties available today, and a system to distribute them to farmers, it would take more than 20 years to replace existing plantations. But we don’t have these varieties, and we don’t have such a system. For that reason, it’s vital to look at CSA practices that can be implemented quickly and effectively.”

Under the CGIAR Research Program on Climate Change, Agriculture and Food Security, teams headed by Rainforest Alliance climate expert Martin Noponen and IITA’s Laurence Jassogne have come up with different packages of climate-smart practices depending on the needs of particular farms. Some farms would need to plant more trees to provide necessary shade for cacao plants, while others may have no other choice but to cultivate other crops. The creation of the packages followed field visits to cocoa-producing communities, consultations with local residents and leaders, and assessments of how the changing climate is predicted to affect these areas.

The packages are part of the training that Rainforest Alliance will provide to cocoa farmers going forward. This is to ensure they are meeting the climate criteria set by the Sustainable Agriculture Network Standard, which seeks to conserve biodiversity and improve the well-being of people in the rural areas. By adhering to the criteria, farms receive the famous green frog seal, which may raise incomes for growers due to higher prices that products using certified cacao command.

Also, following a push by Rainforest Alliance, there’s now an informal working group on climate action in agriculture focusing on CSA within the ISEAL Alliance, the global association of organizations that certify farms for meeting desirable environmental, social, and economic standards. The working group is a first for ISEAL in relation to climate change. 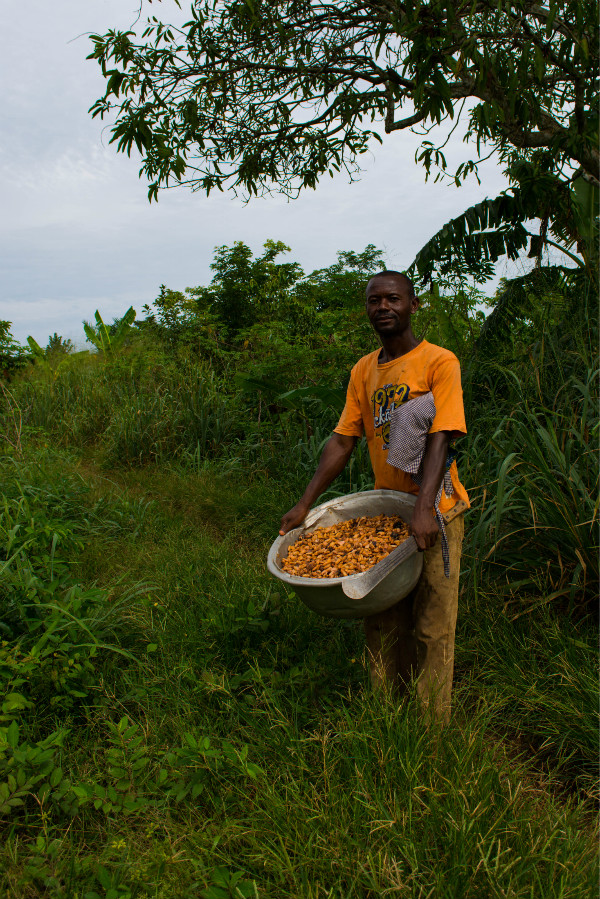 Last year, Rainforest Alliance approached ISEAL about the possibility of creating a climate-smart agriculture working group, where it can share lessons learned from the project with its peers. At the start of 2017, ISEAL heeded Rainforest Alliance’s call. Although the committee isn’t official yet, a work plan is being developed. In August, ISEAL hosted a webinar where Bunn, together with Rainforest Alliance’s Martin Noponen and Hélène Roy, made a detailed presentation of the project, including outputs, CSA packages, and mapping of climate risks facing Ghana’s cocoa-producing regions.

“We’re looking to share learnings across the ISEAL community around this [climate-smart agriculture], and across ISEAL members and standards,” David D’Hollander, policy and outreach coordinator at ISEAL, said during the webinar.

This milestone means another step closer to the consortium’s goal of reaching Ghana’s 800,000 cocoa producers to prevent what could be a threatening scenario for the industry in the coming decades.

In addition, Rainforest Alliance is collaborating with the World Cocoa Foundation to develop a series of climate-smart training add-ons using the CCAFS-developed climate-smart packages. The add-ons would complement the foundation’s updated cocoa extension service training that was jointly developed with Ghana Cocoa Board, or Cocobod, a government-controlled institution that fixes the price of cocoa and sells farm inputs. The training modules aim to provide extension workers or lead farmers with guidance on how and what to communicate and recommend to other farmers depending on the climate change-related risk they face.

“Once we start implementing this information into the broadly accepted sector-wide harmonized training and are able to scale this with the many involved stakeholders going forward, I think the project will have a large positive impact on productivity and resilience through addressing specific climate hazards in Ghana,” said Noponen.