In East Africa, climate change and variability has increasingly aggravated the challenges associated with agricultural livelihoods, making farmers to struggle with food insecurity and loss of agricultural biodiversity. In the past 10 years, farmers in Hoima continued to experience erratic rainfall, increased incidences of drought and shortened seasons and as a result lost their diversity and narrowed the gene pool on which they depend. Consequently, only one-third of the households were food secure throughout the year and 10% of the families faced food deficits for over six months of the year. One of the strategies for adaptation is improving the level of diversity within the communities and improving farmers’ resilience through improved access to diverse seeds that are well adapted to climate change.

The Alliance of Bioversity International and CIAT, in collaboration with the national partners, has implemented two projects in Kenya, Tanzania and Uganda aimed at enabling smallholder farmers to adapt to climate change through increased varietal diversity. The first project “Promoting Open Source Seed Systems for Beans, Millet and Sorghum for Climate Change Adaptation in Kenya, Tanzania and Uganda” was supported by the Benefit-sharing Fund (BSF) established under the International Treaty on Plant Genetic Resources for Food and Agriculture (ITPGRFA, referred to in this paper as ‘Plant Treaty’) in collaboration with the National Plant Genetic Resources Centre (NPGRC – Tanzania), National Agricultural Research Organization’s Plant Genetic Resources Center (NARO-PGRC-Uganda), The Genetic Resources Research Institute (GeRRI) of Kenya’s Agricultural Research and Livestock Organization, Hivos (The Netherlands), and Sustainable Agriculture and Natural Resource Management Africa (SANREM-AFRICA). The project ended in October 2019.

The two projects aimed to identify high potential materials from genebanks and exchange resources between national genebanks of Kenya, Uganda and Tanzania through Standard Material Transfer Agreements (SMTAs). One critical element of these projects was participatory varietal selection (PVS) from a pool of 63 bean and 44 finger millet varieties in Hoima, Uganda. Farmers identified and selected seven bean and seven finger millet varieties. Further characterization of the identified varieties included organoleptic testing and nutritional analysis of the selected varieties. The information on these varieties were compiled in a seed catalogue (available here).

From 23 February – 3 March, the Alliance and the above-mentioned partners held an event dubbed “Training and seed exhibition for climate change adaptation: Increasing production, improving quality and Establishing Markets for Beans and finger millet for Smallholder Farmers in Hoima Uganda’. The main aim of this weeklong event was to create a forum where seeds catalogues were disseminated to farmers, promote a seed fair and exchange of genetic resources, and train farmers on seed quality assurance and business management.

The event attracted over 300 farmers from across Uganda including Hoima, Masindi and Sheema districts from Western, Wakiso district from Central, and Iganga district from Eastern Uganda. The farmers showcased over 72 varieties of both local and improved landraces; 20 varieties of finger millet, groundnuts, local indigenous vegetables, maize, groundnuts, cassava and wild fruits. 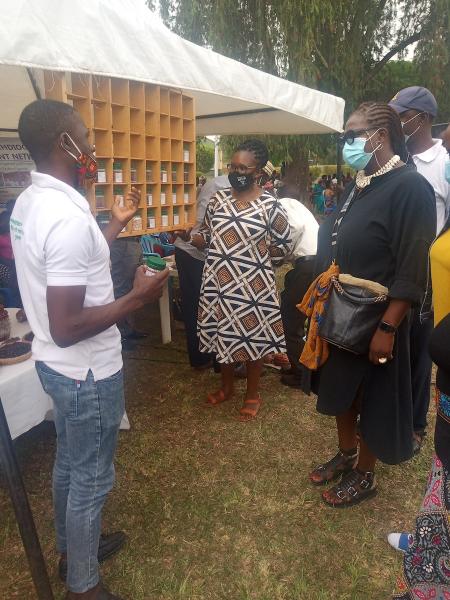 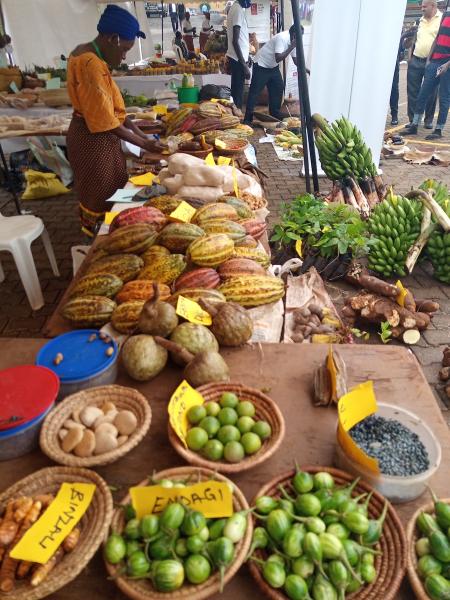 A display of different indigenous vegetables and fruits on the left and exchange of knowledge and information about seed value addition on the right during seed fair event in Hoima Uganda. Credit: Alliance of Bioversity International and CIAT/T. Recha

“The first time I was here was in 2013, we came to find out the number and types of beans and millet varieties you had. The journey has been long in finding new varieties that farmers can use for climate change adaptation. I’m now grateful that the journey has reached a point where we can see farmers having varieties within their seedbanks and homes both for climate change adaptation and for their nutrition.” said Dr. Gloria Otieno.

During this event Dr. Gloria Otieno and Tobias Recha of the Alliance presented the seed catalogues to farmers from all the districts and discussed in detail the useful attributes of each variety and its contribution to both food and nutrition security. The catalogues were also presented to NARO breeder Dr. Ronald Kakeeto who had guided the PVS process with farmers.

The Managing Director of the Alliance of Bioversity International and CIAT Suzanne Ngo-Eyok was also in attendance and reiterated the importance of the event for farmers especially in ensuring the exchange of seeds and related knowledge for climate change adaptation and food security.

“We started this program here in 2016 to look at seed exchange and conservation through farmers’ participation. Through the years, the number of farmers and partners went beyond the borders of Hoima district and increased collaborations through other regions and countries like Tanzania, Ethiopia, Kenya, Burundi and Rwanda where through the FAO Treaty, we have encouraged exchange of genetic resources to make sure that there are materials that come from different countries to address the impairment to growth and agricultural cultivation in this region. The agricultural productivity constraints were linked to food insecurity, drought and changing seasons, and unreliability of the weather. Our aim was to increase ability to not only grow different varieties from different regions but increase the resilience and productivity of agriculture in the farming communities.” explained Suzanne Ngo-Eyok.

The successful implementation of the project activities demonstrates the interdependence of countries for access to genetic resources for climate change adaptation. The launch of the seed catalogues has paved a way for further dialogues at policy level on how farmers can better benefit from the multilateral system of access and benefit sharing for a gene pool of materials they can use directly or through further breeding for climate change adaptation.

“I take this opportunity to appreciate our partners at the Alliance of Bioversity International and CIAT for the good and developmental agricultural interventions they have brought to us. I also want to thank NARO for their role in partnering with us and linking the Alliance to us,” said Godfrey Kairagura, the community mobilizer and leader at Hoima Community Seed Bank. He concluded:

“We need to promote nutrition, and now we are able to plant different crops in small portions of our land like vegetables, beans, Finger millet, bananas etc., unlike just planting maize alone in a big area which is not good. We have also had exchange programs where we visited farmers in other regions including Kenya and we saw how they were benefiting from the programs of the Alliance. We discovered that farmers were not only harvesting a lot but also making a lot of money from selling the produce. Currently, we are also starting to benefit from these good seeds and are producing a lot of food. We are hoping to make money too.”