After receiving almost 200 entries and around 59,000 public votes on Facebook to decide the top 20 entries, the judging panel have selected the three winners of the ‘Women and Agricultural Biodiversity’ photo story contest. Find out which photo stories were winners here.

After receiving almost 200 entries and around 59,000 public votes on Facebook to decide the top 20 entries, the judging panel have selected the three winners of the ‘Women and Agricultural Biodiversity’ photo story contest.

The contest was organized in the framework of EXPO Milano 2015, the European Year for Development and as part of celebrations for today’s event ‘Agricultural biodiversity, value chains and women’s empowerment’ where the winners have just been announced.

The standard of entries was really high, highlighting women from around the world and the different ways that they use and safeguard agricultural biodiversity, whether cooking a traditional dish, bringing products to market, feeding their families, sharing their knowledge with others or enhancing the productivity and resilience of their farms and home gardens. We would like to say a big thank you to everyone who took part by entering the contest, voting on Facebook or helping us to spread the word.

1. Leonora Astete submitted this moving photo story from the Philippines, showing Aranta, a Dumagat from Aurora Province, processing food from a fishtail palm tree. Leonora is a Community Program Officer working with the Lyceum of the Philippine's University's (LPU) in the Community Outreach & Service Learning Unit. Learn more about Leonora in this interview. 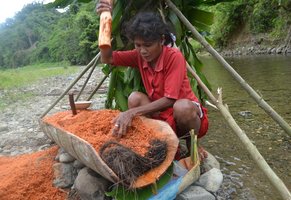 Aranta shows the final stage of turning sap from the tree into yuro (flour), enough to feed her community for a week. All the materials, including the Pugahan trunk, used for the laborious production are naturally-sourced. Aranta is one of the few remaining Pugahan ritualists observing traditional ways in producing food.

2. Santosh Rasaily shared his photo story about two women from the mountainous region of Nepal who are part of a community-based seed production group. Santosh is from the Chitwan district of Nepal and is currently pursuing a Master’s degree in Genetics and Plant Breeding from the Agriculture and Forestry University. Learn more about Santosh in this interview. 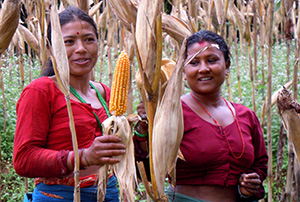 These two women are successful maize seed producers, engaged with a community-based seed production group in the hilly Sasha village of Nepal, in the Dhading district. I went there to evaluate the performance of improved maize.

3. Alexis Gomez entered an inspiring photo story from Philippines, showing Amalia Sumabat preparing her land to plant vegetables with the help of a water buffalo. Alexis is 35 years old, married and lives in Butuan City, Philippines, and describes himself as "hooked on photography". Learn more about Alexis in this interview.

She is plowing her land with the help of a water buffalo (Carabao) in preparation for planting different kind of vegetables: the traditional way of farming in the Philippines.

Congratulations to our winners and your prize of a digital SLR photo will soon be on its way to you. For those who did not win, thank you so much for taking time to enter and also allowing us to use your submitted photo stories to highlight the important link between women and agricultural biodiversity in the future.

Find out about our eventAgricultural Biodiversity, Value Chains and Women's Empowerment that took place in Milan, Italy on the 17th of September and watch it again here.

Partners
This contest was carried out in partnership with the UN International Fund for Agricultural Development, UN Food and Agriculture Organization, the Italian Development Cooperation Ministry of Foreign Affairs and UN Expo Milano 2015.