In a new blog, Bioversity International scientists Gina Kennedy and Dietmar Stoian explain how food biodiversity – the diversity of plants and animals and other organisms used for food, both cultivated and from the wild – can help address hunger, malnutrition and micronutrient deficiencies. The blog highlights the main issues discussed in Chapter 2 of Mainstreaming Agrobiodiversity in Sustainable Food Systems, a new Bioversity International book that provides solid evidence that investments in agricultural biodiversity play a critical yet overlooked role in tackling global targets such as reducing poverty and malnutrition, reversing environmental degradation and combatting climate change. The book was presented on 11 October 2017 at the 44th Committee on World Food Security in Rome, Italy.

By Gina Kennedy and Dietmar Stoian

Why do we live in a world where millions go hungry while millions are obese, and both groups can suffer from micronutrient deficiencies? What has led to this paradox and what can we do about it?

We have a resource, often undervalued, that can help address these global issues: food biodiversity. Food biodiversity is the diversity of plants and animals and other organisms used for food, both cultivated and from the wild.

1. Food biodiversity provides a wide range of nutritious, colourful options to choose from that meet diverse cultural and taste preferences. Biodiversity has been recognized as a fundamental principle in recent dietary guidelines like the Mediterranean Diet Pyramid and the Nordic and Brazilian dietary guidelines. 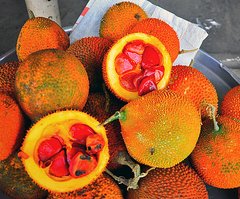 2. Food biodiversity takes advantage of important and significant nutritional differences between species. Gac, for example, is a little-known fruit from Southeast Asia that has much higher levels of beta-carotene – which the body converts to vitamin A – than many other fruits in the region. Also, different fish species can have different nutrient composition, for example certain local fish species in Bangladesh have high levels of vitamin B12, calcium, iron and vitamin A – much higher than cultivated fish like carp.

3. Food biodiversity takes advantage of important and significant nutritional differences within species – orange-fleshed bananas, for example, contain much higher levels of beta-carotene than typical white bananas – one To’o or Asupina banana can provide enough vitamin A for a child for a whole day.

4. Food biodiversity provides the ingredients for a portfolio of nutritious foods in different seasons of the year, including small animals and diverse fruits and vegetables to improve diets. Lesser known plant and animal species are often well adapted to local environments including soils and climate, may depend less on farming inputs, and can yet be more nutritious than typical food commodities. 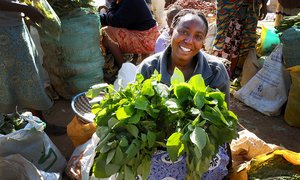 5. Healthy food needs to be: available in sufficient quantities year round, accessible, affordable, and acceptable for people to eat it. Food biodiversity offers options that are often all four. Still, local food biodiversity is often undervalued. Education and promotional campaigns are critical to spread the word. In Peru and Kenya, for example, working with local chefs has transformed the way that many people felt about quinoa or local leafy vegetables. Making these nutritious foods desirable keeps them on plates and in production.

How to make the most of food biodiversity

Brazil is a great example of how to take steps toward a healthier diet built on enhanced use of biodiversity. The government has recently stipulated several policies to promote local and indigenous biodiversity for food and nutrition as part of its Zero Hunger campaign. This includes the promotion of diverse, healthy native foods in dietary guidelines; support to marketing food biodiversity through public procurement strategies (e.g. for food in schools); and prioritizing food biodiversity in pertinent national strategies and action plans associated with agriculture and nutrition policies.

Learn more about food biodiversity in Chapter 2 of a new publication by Bioversity International – Mainstreaming Agrobiodiversity in Sustainable Food System.

Photos (from top to bottom):

Chapters 2 contributes to the CGIAR Research Program on Agriculture for Nutrition and Health (A4NH), supported by CGIAR Fund Donors