Where our food crops come from

Explore the geographic origins of our food crops – where they were initially domesticated and evolved over time – and discover how important these “primary regions of diversity” are to our current diets and agricultural production areas. 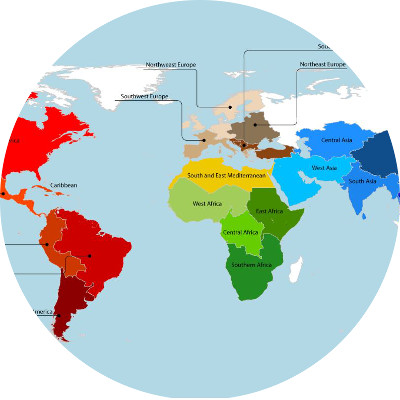 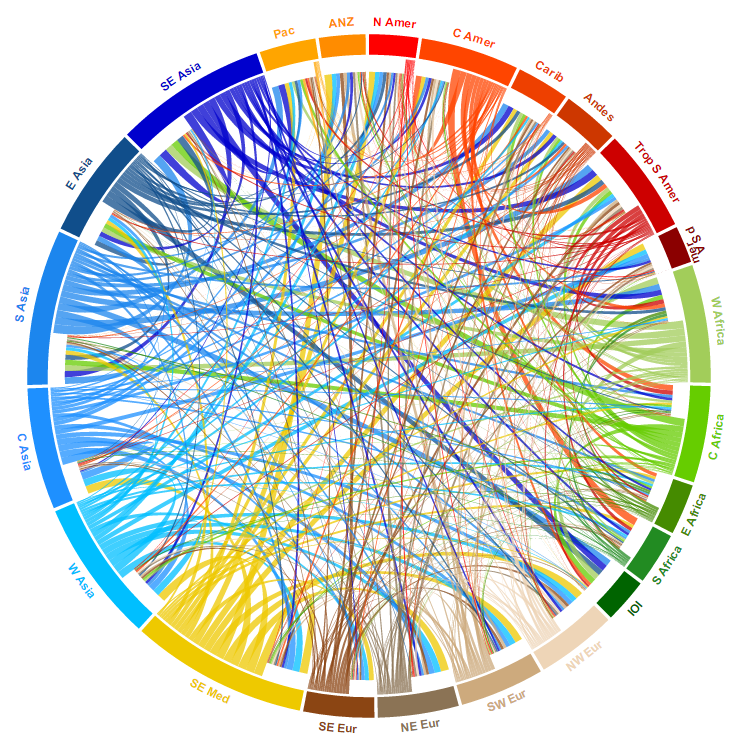 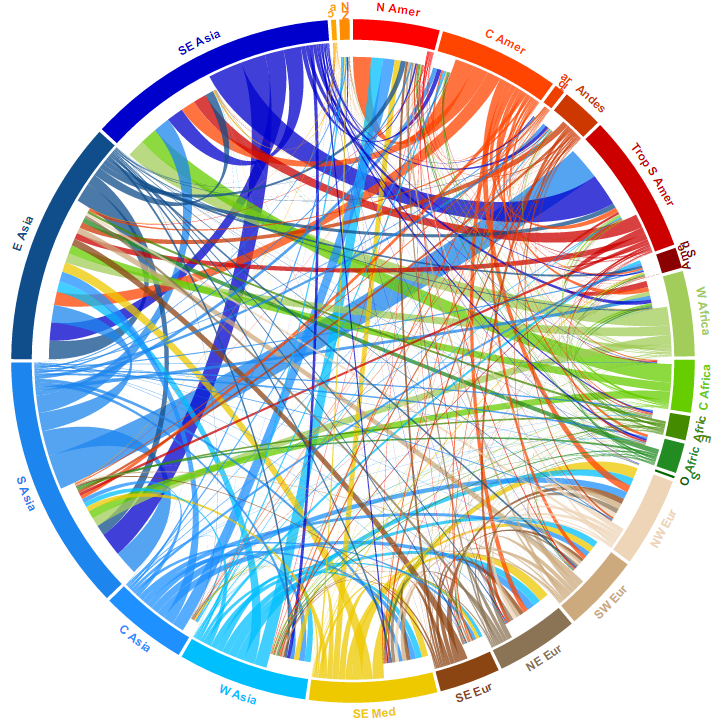 Primary regions of diversity of selected major agricultural crops worldwide. Note that some crops possess more than one primary region of diversity (e.g., wheat is listed in Central Asia, West Asia, and the South and East Mediterranean). Note also that due to eco-geographic variation within countries, some countries belong to more than one region (e.g., Colombia is assigned both to Andean and to tropical South American regions). For further information on the primary regions of diversity of all 151 crop commodities assessed in this study, and the countries pertaining to each region, see the explanatory material at the bottom of this page.

About ‘Where our food crops come from’

by Colin K. Khoury, Harold A. Achicanoy, Carlos Navarro-Racines, Steven Sotelo, and Andy Jarvis at the International Center for Tropical Agriculture (CIAT). Version 1.0 (May 2016). This work is licensed under a Creative Commons Attribution 4.0 International (CC BY 4.0).

About the circular plots

Each region has a color representing its own “native” crops and those colors are connected to other regions due the importance of those crops in the diets/agricultural production in other regions. The direction of the contribution is indicated by both the “native” region’s color and a gap between the connecting line and the consuming/producing region’s segment. The magnitude of contribution is indicated by the width of the connecting line. Because the line width is nonlinearly adapted to the curvature, it corresponds to the contribution size only at the start and end points. Regional food supply values (per capita/day) were formed by deriving a weighted average of national food supply values across countries comprising each region, with national values weighted by population. Regional production values were formed by summing national production values across countries comprising each region.

Methods and code for the plots were derived from The Global Flow of People by Nikola Sander, Guy J. Abel and Ramon Bauer at the Wittgenstein Centre for Demography and Global Human Capital. Their human migration source code and our source code are both available on Github.

We analyzed data for each crop commodity per country per measurement over the most recent three years for which sufficient data were available (2009-2011). All (177) countries consistently reported during the time period were included for food supplies variables, as well as for production quantity and harvested area, covering 98.5% of the world’s population. All (141) countries reported for (current million US$) production value were included, covering 94.1% of the world’s population.

Regions were delineated following national borders in order to form manageable units for the assignment of primary regions of diversity of all crops, and at a scale enabling comparison with national food supply and production data. Regional classifications followed those listed in Annex 2 of the FAO State of the World’s Plant Genetic Resources for Food and Agriculture (2), modified to more accurately represent eco-geographic parameters driving plant species distributions. Specifically, both western and eastern Europe were split into north and south regions to account for cold temperate versus Mediterranean ecologies; Australia and New Zealand were segregated from the remaining (tropical) islands of the Pacific region; and South America was split into Andean, temperate, and tropical regions. A total of 23 regions were delineated worldwide. To account for eco-geographic variation within countries, those countries whose boundaries included more than one region were included in all appropriate regions (e.g., Colombia was assigned both to Andean and to tropical South American regions). See the countries-regions table for a listing of all countries and their associated eco-geographic regions.