Ethiopia is in the process of digital transformation to create a digital economy. In this regard, the country has prepared a Digital Strategy 2025 which is set to transform the country's national economy through four major sectoral pathways including agriculture, manufacturing, IT-enabled services, and tourism. Particularly, the recent effort in the development of the “National Digital Agricultural Extension and Advisory Services Roadmap to 2030” is a clear indication of the country’s commitment to transforming its agriculture through digital solutions. To achieve the digitalization and transformation process and embrace the digital economy, there is a need to develop a clear process and framework that can enable the availability of quality and standardized data in an organized manner. This is noting the fact that despite decades of data collection there is still a tremendous gap because data are scattered across different institutes and sectors.

Different organizations in the agricultural sectors in the country put tremendous effort into producing data, and for that millions of dollars have been invested.  Producing as well as utilizing of data in the agricultural sector is growing from time to time mainly due to the maturity of data-capturing devices such as the Internet of Things (IoT), sensors, satellites, weather stations, and farm equipment coupled with data being generated from conventional surveys, laboratories, and scientific publications. However, most of these datasets are scattered across different entities, stored in non-standardized and inconsistent representations which undermine one’s ability to conduct analysis. Organizations and individuals tend to collect the same data due to limited information about the existence of that same data in another institute, leading to duplication of efforts and wastage of resources that could have been invested elsewhere. Data sources are mostly unknown to data consumers, data consumers are also expected to browse various websites, manually combine data from various sources, and so on. Though efforts have been made to harmonize datasets and facilitate storage and data sharing, there is still limited success due to different reasons including lack of champion institution, limited human and infrastructural capacity, limited cooperation between sectors and among directorates within sectors, low technological readiness, limited governance system that can facilitate data access and sharing, and data incompatibility. Even when willing to share their data holdings, organizations often encounter difficulties because of a lack of clear guidelines and policies. In addition, the absence of governing policy and legal frameworks, and the lack of a well-established integrated system are among the key agricultural data-sharing hindrances.

The Ministry of Agriculture (MoA) in Ethiopia is among the key government institutions in the country striving to digitalize its system and transform the sector. The Ministry has taken note of the above challenges and is trying to take measures. Among the many is the recent approval of a ‘Soil and Agronomy Data Sharing Directive’ that outlines how entities in the country share data in an organized manner. In addition, the MoA has moved a step further towards establishing an integrated “Agricultural Data Hub” that will host harmonized and standardized agriculture-related datasets in the county. In addition to hosting data and facilitating access and sharing, the data hub will also be instrumental to facilitate and encourage innovations in the development of decision-support tools and advisories across different use cases.

With the above background, the Accelerating Impacts of CGIAR Climate Research in Africa (AICCRA) program is supporting the development of an integrated ag-data hub in Ethiopia. The program is considering to co-develop a dedicated, and publicly owned and operated - one-stop shopping national ag-data hub for Ethiopian government policymakers, agrometeorology experts, ag extension officers, farmers, value chain actors, and other end users (through consolidation, integration, and upgrading of the existing systems) that provides all relevant data, insights, and analytics needed to make fact-based decisions when conducting agricultural operations. Similar efforts of the project are undertaken in different African countries as well.

The development of the ag data hub has gone through different steps including conducting intensive and frequent stakeholder workshops, experts level meetings, and discussions with high-level officials at the Ministry of Agriculture. Particularly,  the AICCRA Ethiopia project through its implementing center, the Alliance of Bioversity and the International Center for Tropical Agriculture (CIAT), hereafter the Alliance, went through different engagements with national partners, particularly with the Ministry of Agriculture, to map key actors/data holders, assess the nature of data and meta-data of each institute, and analyze the accessibility of those data. The stakeholder engagement and cataloging of the available data and resources enabled us to understand the nature and design requirements of the ag. data hub.

Further, to make sure that the development of the Ag datahub system aligns with the government plan, a high-level discussion was held with key personnel in the Ministry including Dr. Anteneh Girma, advisor to the Minster, Ministry of Agriculture, Ato Tsehayu Garedachew, planning, monitoring and evaluation advisor to the Minister, Ministry of Agriculture and Ato Tesema G/Medhin, lead executive for Management at Ministry of Agriculture. The discussion with Dr. Anteneh was instrumental as he gave clear direction as to how the ag datahub can be developed and implemented in the Ministry, and how the effort and process should be sustainable. Dr. Anteneh further expressed his happiness about this initiative and indicated the importance of an integrated ag data hub by saying “we spent long days and sleepiness nights to prepare performance report of the Ministry. Had the integrated ag data hub been already in place in the Ministry, it would have eased the process of report generation”.  Dr. Anteneh and his management team have shown strong interest and recommend the technical people in the ICT office to provide all the support required from the Ministry to complete the project. In line with this, the Ministry presented the datahub project progress in the Data partnership workshop organized by the Agricultural Transform institute to potential agricultural data producers. The ministry representative considered the datahub as a strategic asset to solve the sector’s data challenges and its commitment to realizing the system.

Noting the possible shortcomings of engaging international consultants and exploring the capacity of national experts, the Alliance has explored national talents in the database developed and management and created a consortium of experts to lead the development of the data hub. As part of this exercise, ACATECH Technology PLC (www.acatechte.com) was assigned the lead the consortium and development of the data hub for Ethiopia. ACATECH works with different partners in the country including those involved in system design and subject matter specialists.

The development of the data hub is organized into different phases including developing and refining the system requirement specification document, designing the technical solution architecture, designing metadata standards and data architectures, and designing and initial implementation of the different services. Currently, the initial steps are completed, and the data hub development exercise has started in earnest at the MoA. This will follow with the development of ‘mini-hubs’ in other institutions such as the Ethiopian Institute of Agricultural Research (EIAR) and others. The mini-ag data hubs will connect with the main ag data hub that is already hosted at the MoA. The initial prototype data hub (http://164.92.166.11) is being tested at the MoA and can be released for public comment/suggestion before the end of 2022. 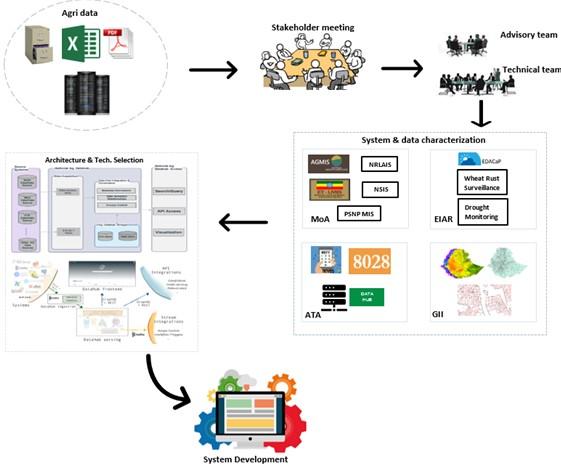 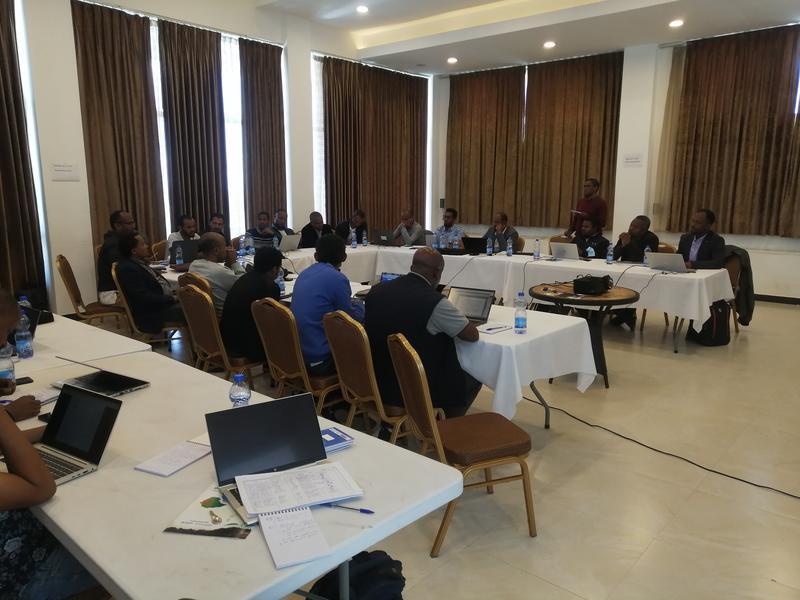 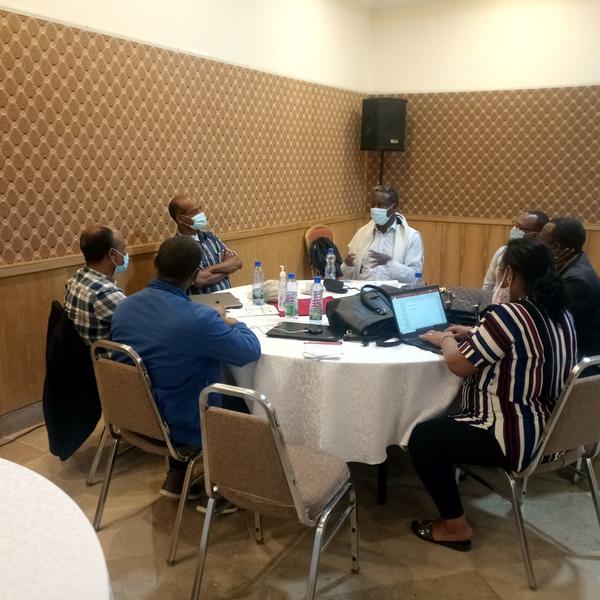 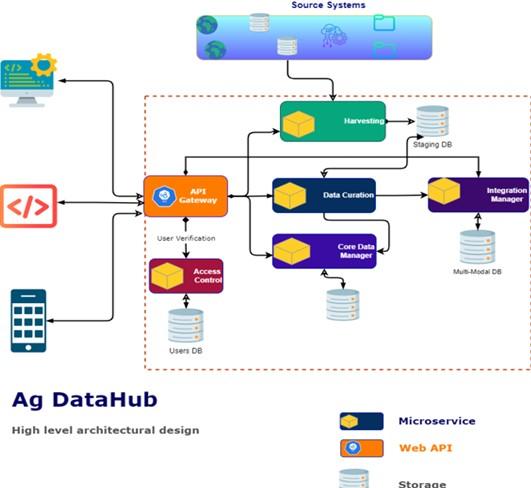 Accelerating Impacts of CGIAR Climate Research for Africa (AICCRA) is a project that helps deliver a climate-smart African future driven by science and innovation in agriculture. It is led by the Alliance of Bioversity International and CIAT and supported by a grant from the International Development Association (IDA) of the World Bank. Explore our work at aiccra.cgiar.org. The supporting soil health initiatives (SSHI) project of GIZ-Ethiopia also provides technical and financial support towards the realization of the data hub, including developing a mini-hub at EIAR. The Excellence in Agronomy (EiA) program of the CGIAR is supporting the data hub building exercise by providing technical support related to Carob extract, transform and load (ETL) data flows among others.