The underlying technology used to track the evolution of plant viruses can help track human viruses as well.

In 2016 cassava crops in Southeast Asia started faltering due to an unknown culprit. Farmers expecting to harvest the plant’s usually large roots were uncovering mere fractions of the starchy staple crop. Researchers determined a virus, which causes cassava mosaic disease (CMD) in the South of India, had emerged in Southeast Asia, sickened plants, and asymptomatically spread across farms and national borders. Millions of dollars of losses ensued as authorities and experts convened to slow the spread and find a cure.

While the scale of human loss and economic fallout of the COVID-19 pandemic are far greater than the damage caused by CMD, plant viruses can be devastating for poor farmers due to their lasting negative impacts on livelihoods and economies. But the underlying virology is the same. When a damaging new virus emerges, scientists race to monitor its spread and genetics so that new variants can be quickly identified and rapid responses can be implemented. For this to happen efficiently, new technologies need to be implemented, made widely available, and, most importantly, skilled personnel need to be available.

When CMD emerged in Southeast Asia, the Alliance of Bioversity International and CIAT invested in the technology and know-how needed to monitor the genetics of the virus, what scientists refer to as “genomic surveillance.” The virology lab of the Alliance in Colombia pioneered the use of portable sequencing technologies, from Oxford Nanopore Technologies, for these purposes. That same capacity is now contributing to monitoring the genetic variation of SARS-CoV-2, the virus that causes COVID-19, in collaboration with national health authorities and 17 other labs in Colombia.

When you do the diagnosis of a virus, whether in people, plants or animals, the challenges and available technologies are the same,”

Under the collaboration agreement, Colombia’s National Institute of Health (INS, for its Spanish acronym) sends SARS-CoV-2 virus samples to the Alliance’s lab for sequencing. Results are then communicated by the laboratories belonging to the network to the INS. The INS is solely responsible for publicizing the detection of new genetic variants of the virus, or other relevant information detected by the Palmira lab several other external labs in the network. This work is funded by the INS.

This is not the first time the Alliance has assisted in Colombia’s strategy to respond to the pandemic. In August, Cuellar and colleagues sequenced the first SARS-CoV-2 isolate from Cali using this technology. This February, the Alliance agreed to loan ultra-cold freezers to public health authorities to assist in the rollout of coronavirus vaccines that require extremely cold temperatures for transportation and storage.

The Alliance virology lab is on the outskirts of Cali, Colombia’s third-largest city by population with about 2.5 million inhabitants. While known for its top-tier medical services, Cali and the region it serves do not have the same virus-tracking capacity when compared to the capital, Bogotá. Part of the Alliance’s role is to assist in training experts on sequencing techniques to study viruses.

To date, Cuellar’s team has collaborated on portable sequencing technology workshops with researchers from Universidad del Valle, the Palmira Campus of the Universidad Nacional, and Universidad ICESI, which are universities that primarily serve southwestern Colombia.

“The collaboration has been an opportunity for the Alliance to help strengthen virology capacities for molecular diagnosis and rapid response in the country,” Cuellar said. “This capacity building will have positive impacts long after the pandemic subsides.”

The Alliance Virology and Crop Protection group is primarily focused on implementing and building open-access tools to track and diagnose viruses that target subsistence crops like cassava. This essential work supported by the Alliance’s Cassava Program and the CGIAR Research Program on Roots, Tubers and Bananas (RTB), aims to support regional efforts for rapid response and management of the CMD epidemic in Southeast Asia. 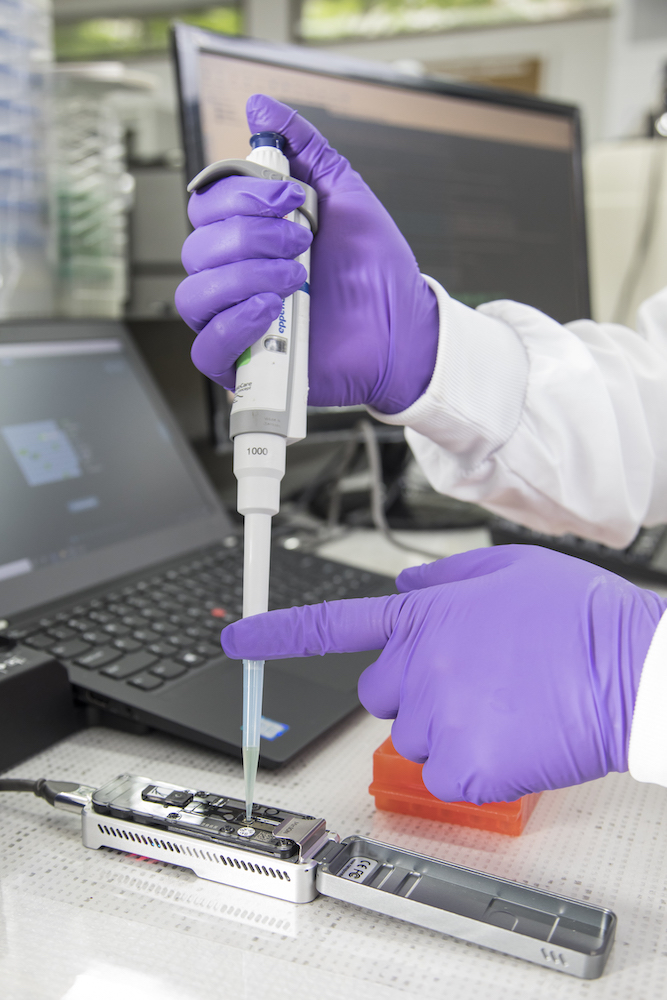 Information on the work the Cassava Program does on surveillance and diagnostics of pests and diseases can be found here: https://cgspace.cgiar.org/handle/10568/110577?show=full

CMD activities in Southeast Asia can be found here: https://cassavadiseasesolutionsasia.net/webinar-series/